After a long absence in the mainstream games, Mario's Raccoon form returns as a common powerup found in the game. He has the same abilities as he did in Super Mario Bros. 3. If the player dies enough times in a level they've yet to complete, then the game will give the player a golden block they can hit and out comes a new form of Raccoon Mario: White Raccoon Mario. White Raccoon Mario bears a similar appearacne and role as White Tanooki Mario, as they both grant Mario the same powers as the normal Raccoon/Tanooki form, but giving him a white and gold appearance and making him invincible as well

Raccoon Mario appears as a powered up form of Mario, only appearing in the Super Mario Bros. 3 graphic style, granting Mario the same powers he had in said game.

Raccoon Mario makes its debut in a Paper Mario game in the form of a collectible sticker that attaches a tail to Mario. With it, Mario can spin his tail around to counterattack enemies and reflect their projectiles back at them. Mario is required to use a Tail Sticker during the fourth phase of the final battle, as he needs to reflect the incoming Chain Chomp back at Bowser to knock him off of cliff.

Raccon Mario once again appears, this time, the power up comes in the form of a Battle Card. Unlike in Paper Mario: Sticker Star, the Battle Card will give Raccoon Mario ears and the tail will be directly attached to Mario. Raccoon Mario is required for the first phase of Ludwig's boss fight, as reflecting back the cannonballs it launches is the only thing powerful enough to damage it.

Mario transforms into Raccoon Mario when he uses a Super Leaf. Upon using a Super Leaf, he grows a raccoon tail and raccoon ears and gains the ability to fly.

Raccoon Mario in "The Adventures of Super Mario Bros. 3"

Raccoon Mario slowing down his descent 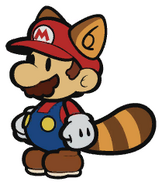 Attention MarioWiki users!: This article is too small or lacks sufficient information. Whether you are commenting or editing, we would be pleased if you help MarioWiki by expanding it.
Retrieved from "https://mario.fandom.com/wiki/Raccoon_Mario?oldid=292796"
Community content is available under CC-BY-SA unless otherwise noted.