Quicksand is a harzard that appears in certain Mario games. They are usually found in the desert and they are usually darker than the normal, safer sand. There is two types of quicksands: the ones that slowly pull Mario in allowing him time to jump out and the ones that instantly drag Mario under causing him to lose a life.

Quicksand mainly appears in World 2 of this game. Mario can jump rapidly to get to avoid getting pulled under.

Quicksand only appears in Shifting Sand Land for both of these games. Quicksand is a much darker color and as soon a character steps onto it, they get pulled under instantly losing a life.

Quicksand usually appears in desert-related levels of the Mario Kart games. Quicksand usually drastically slows down a character rather than pull them in. Heavy characters should always avoid this since they have poor acceleration.

Quicksand appears in Wavy Beach of Super Princess Peach. Unlike other games, falling to the bottom of a quicksand pit doesn't instantly kill you instead, it just takes you to hidden niches that contain hidden secrets such as coins, Toad boxes, and more. You can easily jump out by rapidly mashing the jump button. Quicksand in the latter levels can also be pink. Certain pits actually have a bottom but it doesn't instantly kill you and is very shallow.

Quicksand always appear in the desert level of this game series. Like from Super Mario Bros. 3, Mario can jump rapidly to avoid losing a life. In some situations, sinking under the quicksand leads to secret paths and secret exits.

Quicksand appears in Dusty Dune Galaxy and Sand Spiral Galaxy and instantly costs Mario or Luigi a life should they fall into it.

Quicksand appears in World 2 of this game mainly in the levels Drybake Desert and Sandshifter Ruins. Mario can jump over and over again to escape but he must be extremly careful. Sinking into the quicksand instanly earns him a Game Over.

Quicksand appears as an out-of-bounds area in this game. Quicksand is only seen in the course Shifting Sands as a darker orange color.

Quicksand reappears in Super Mario Odyssey in the Sand Kingdom. Unlike the previous open-world 3D Mario games, escaping quicksand is possible in this game. Upon first stumbling into quicksand, Cappy will tell Mario to quickly jump back out. 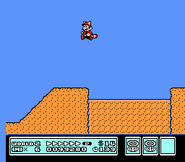