Beanish
Prince Peasley is a major supporting character in the game Mario & Luigi: Superstar Saga. He is the son of Queen Bean, a boss and the rightful heir to the throne of the Beanbean Kingdom. He is highly narcissistic and rides around on a flying bean, which is about the size of a pillow. He appears often to aid the Mario Bros. in their quest to defeat Cackletta. It was his idea to replace the Beanstar with a fake to deliver to Cackletta (although Fawful spotted the switch, so it didn't work).

Like Lady Lima, Peasley's name is derived from a vegetable: in his case, peas. His name can also be a pun on "peaceably," since he wants to defeat Cackletta and return peace to the Beanbean kingdom.

Prince Peasley appears to be a brave and headstrong character who often goes off to lead the charge, although this sometimes gets him into difficult situations. He also seems to have become friends with Luigi, as Luigi thinks very highly of him. 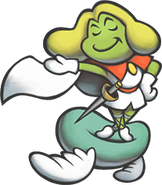