Preying Mantas (also simply called Jellyfish) are a type of Jellyfish found in several games. They are commonly found in underwater coves or deep underground lakes. They are normally seen dawdling in the waters but as soon as the heroes approach, they start bobbing around. Preying Mantas aren't too menacing and they are relatively easy to defeat in all their appearances. Preying Mantas are first seen in the Yoshi series but have since appeared in a couple Mario series games as well.

Preying Mantas return in Super Mario Galaxy. In this game, they are seen in dark underground lakes such as those in the Bigmouth Galaxy and the Deep Dark Galaxy. They behave as they did in their previous appearances (bobbing up and down upon sight of Mario/Luigi) however some are seen circling a set location in groups and don't do anything upon sight of the heroes. Preying Mantas can easily be defeated with a Star Spin or by tossing a Shell at them, they release a Coin upon defeat. A different type of Jellyfish called the Jammyfish also appears in this game, the Jammyfish is far more threatening, much larger, and can actually shock Mario/Luigi upon contact, they are also more durable.

Preying Mantas return in Super Mario Galaxy 2 this time only appearing in the Cosmic Cove Galaxy. They behave as they did in previous appearances (either bobbing up and down upon sight of the heroes or circling locations), Preying Mantas once again can be defeated with either Star Spins or Shells and are also seen in the floating water section of the Cosmic Cove Galaxy. The Jammyfish also returns in this game.

After an absence from Yoshi's Island DS, Preying Mantas return in Yoshi's New Island, in this game they are once again found in Submarine Yoshi sections and just as before are idle until Yoshi approaches at which point they start bobbing up and down. Just as before, a Preying Mantas is just as unthreatening as ever and can easily be defeated with a Missile from Submarine Yoshi. They are seen in various World 3 levels such as Rise of the Nasty Nep-Enuts. 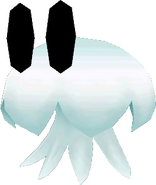