The Power Moon (パワームーン Power Moon?), simply known as Moon (ムーン Moon?) is a main collectable found in Super Mario Odyssey. Power Moons are the equivalent of Power Stars and Shine Sprites from previous Mario games. It is confirmed that there will be more Moons in Super Mario Odyssey than Stars and Shines in previous games. Capping at a whopping 999 moons in total. Moons will also not force Mario to leave the level, unlike previous games.

When Mario collects a Multi Moon, it is worth as much as three normal Moons.

Each Moon is in the shape of a crescent moon or star with eyes, similar to that of Power Stars and Shine Sprites. Their color depends on which Kingdom the Moon is found. Each Kingdom's set of Moons have a different color than those of other Kingdoms.

Some of the Moons in the Metro & Sand Kingdom.

One of the Wooded Kingdom's Moons.

Mario & Cappy getting one of the Luncheon Kingdom's Moons.

Mario & Cappy getting one of the Sand Kingdom's Multi Moons. 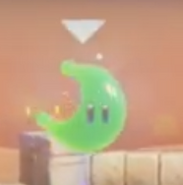 One of the Sand Kingdom's Moons.

Mario using the Sand Kingdom's Moons to fuel the Odyssey.