"Ok, Rookie! Its your turn, see? I want you to squash those red and green drips there!"
― Popple, Château de Chucklehuck, Mario & Luigi: Superstar Saga

Bowser
Birdo
Mario and Luigi (for a short time)

Popple (パーニョ Panyo?) is a thief from the Beanbean Kingdom that debuted in Mario & Luigi: Superstar Saga as the tertiary antagonist. He has had two accomplices, Bowser (known as the time as Rookie), and Birdo. Popple eventually returns in Mario & Luigi: Dream Team.

Popple is a Beanish thief who had appeared as another antagonist of Mario and Luigi: Superstar Saga. Popple is aggressive towards his minion, and the Mario brothers. True to his nickname, Popple is skillful in stealing objects. However, Mario and Luigi interrupt him and manage to prevent him from stealing. One of his weak points is his bad performance at cooperation, he affiliates with Bowser and Birdo but loses his allies. Popple splits up from Bowser who was "Rookie" when they fell off the Beanstar, Popple even split up from Birdo when he was launched.

Popple is a Beanish that wears a mask, a stripy shirt and black pants. He has yellow eyes, and he often bears his teeth. He tends to carry a brown sack over his back.

Main article: Popple/Relationships
Popple is sneaky, greedy, temperamental and backstabbing. He bosses around and abuses his minions. In Superstar Saga, Birdo despised him for blaming her as Birdo launched him to the ceiling towards Little Fungitown.

Main article: Popple/Powers and abilities
Considering Popple as a thief, he can steal objects. However, Mario and Luigi interrupted him resulting a battle.

Popple makes his first appearance right after Mario and Luigi exit the Barrel Maze in the Chateau de Chucklehuck. After making his way out of the maze, Mario notices a strange person behind him instead of Luigi. The person runs off and the Mario Bros. chase after him. They meet up with the person and another, larger guy who looks familiar. The person introduces himself as Popple: The Shadow Thief and his partner Rookie. Mario and Luigi already could tell Rookie is actually Bowser but he has lost his memory at some point (right after he got launched out of the cannon at Stardust Fields). The two get into a battle with the Mario Bros. eventually becoming victorious. Popple and Rookie escape going after the precious Chuckola Cola. The duo return right after Mario and Luigi opened up the way past Chuckleroot going after the Cola. Unlucky for them, Popple and Rookie are soon seen tied up and got knocked away by Bubbles' living Chuckola Cola monster.

The Return of the Shadow Thief

Popple and Rookie return after Mario and Luigi defeated Cackletta and the Beanstar went down to the basement of Woohoo Hooniversity. They are happy with their greatest find until they see the Mario Bros. at the front door. Popple is unhappy but is confident on winning thanks to his own versions of the Bros. moves with Rookie. They were once again unsuccessful in defeating the Mario Bros. but they weren't going down without a fight. After the Beanstar goes mad, they all latch onto it with everyone falling off (Bowser regains his memory after crashing through the ceiling but falls right into Stardust Fields badly injured and is eventually turned into Bowletta).

Popple is seen again at Chucklehuck Woods, this time, trying to reach a piece of Beanstar near the Winkle Colosseum and eventually gets it. However, he spots Mario and Luigi and tries to escape but gets boxed in by the duo. Without Rookie at his side, Popple is forced to fight by himself to keep his Beanstar piece. He loses badly and runs off promising to get back at the Mario Bros.

The Shadow Thief Strikes Back

Popple returns for the final time underground of Teehee Valley noticing a knocked-out Luigi. He then orders his new "Rookie" to tie him up knowing Mario isn't far. After the Mario Bros. are reunited, Popple shows up again saying victory his defiantly within his reach as he introduces his new Rookie: Birdo. However, she has a crush on him with constantly freaks him out. They all eventually get into a fight with Popple coming on the losing end once again. He is extremely angry at Birdo for causing his loss and even fires her. Birdo is greatly upset and knocks Popple into Little Fungitown.

Popple is seen in Little Fungitown where he is finally arrested for his crimes and is seen doing community service. Ironically, the Toad guard watching over him calls him "Rookie."

The Shadow Thief in the Pi'illo Kingdom 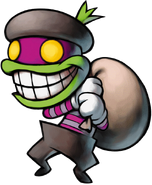 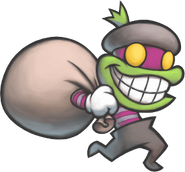