Lani Minella
Pom Pom is a character that first appears in Super Mario 3D Land. She is the female counterpart of Boom Boom.

Mario battles Pom Pom in World 4, 6, and 7, in the airships. It is in a pink room where she is battled, in world six, she has fire in her room. Her last battle is alongside the Boom Boom. She throws a maximum of two boomerangs. When she is defeated by jumping on her three times, she releases several coins, like Boom Boom.

She returns in Super Mario 3D World as a boss. Her attacks are throwing Ninja stars and duplicating herself as a Ninja. She and Boom Boom have ninja attacks combined with their abilities in the sequel of Super Mario 3D Land.

Pom Pom makes her Mario Party debut in the game.[1] Along with Goomba[1] and Monty Mole[1], they are new playable characters.

Pom Pom only appears in the Super Mario 3D World setting. She attacks by making duplicates and throwing ninja stars at the players.

Her arms are shorter than Boom Boom's, she has pinkish skin, a ponytail, and a polka dotted shell. Like Boom Boom her feet are clawed and padded, but the pads are not white but are pink. Her personality is very busy, at least in battles. 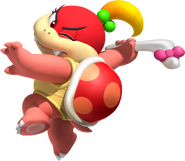 Cute
Add a photo to this gallery

Retrieved from "https://mario.fandom.com/wiki/Pom_Pom?oldid=321827"
Community content is available under CC-BY-SA unless otherwise noted.