Reduces character's size, and reverts any power ups.
Poison Mushrooms (also called Cursed Mushrooms) are mushrooms similar in appearance to a Super Mushroom and a 1-Up Mushroom, except of a slightly darker shade. Touching it in any game reduces the character's size (similar to the Mini Mushroom) or reverts the effects of any power-ups, and can also take off a player's life if he is small. In some games the Poison Mushroom looks similar to the Super Mushroom but they have the opposite effect and sometimes the Poison Mushroom will have "angry" eyes and a purple cap with a skull symbol instead of spots, such as in Super Mario Bros.: The Lost Levels. Sometimes, the poison mushroom will be purple, making is easier to spot and avoid. Depending on the game, they either damage or instant kill you.

In the Super Mario Bros Series

Originally appearing rather similar to the Super Mushroom, new players would discover to their dismay that these mushrooms were harmful.  Later, changes were made which made them easier to tell apart from normal Mushrooms.

Poison Mushrooms make another appearance in Super Mario Bros 3. They appear in a single level and hide in grass instead of blocks.

Poison Mushrooms also appear in Super Mario 3D Land, They only appear in special worlds. where they have a purple cap without a skull, and angry eyes. They emit a trail of purple gas, which is just for show. They steer themselves towards Mario, but if Mario reaches a place where the Poison Mushroom can't get at him, it will disappear.

Technically, Poison Mushrooms don't make an appearance in the game. However, in the four main settings in night mode, 1-UP Mushrooms turn into Rotten Mushrooms which will chase the character and try to kill them.

In the Paper Mario Series

Poison Mushrooms also appear in Paper Mario: The Thousand-Year Door, (with a slightly different design, Green with Purple spots instead of purple with pink) but not as items. When in battle, there is a chance that poison mushrooms will appear on the Bingo! wheel. If you match up three poison mushrooms, you and your partner will lose half your HP, and you will also lose half your FP and SP.

Poison mushrooms appear as items, Poison mushrooms are useless on their own, poisoning the user when eaten, but can be used in many helpful recipies such as Trial Stew which gives the user experience depending on their current health.

Poison Mushrooms return in Paper Mario: Sticker Star in the form of sticker. The Poison Mushroom poisons both Mario and enemies for two turns. However, they are useless against poison-based enemies such as Poison Bloopers. They are one of the rarest regular stickers in the game. You can purchase one from a Toad behind the houses in Decalburg, purchase one from Whammino Mountain or find them sparsely hidden around in other levels. Mario needs one to access World 2.

In the Mario & Luigi Series

The enemy Trunkle will suck in a series of items which Mario and Luigi must dodge. Some of those items as Poison Mushrooms, which will poison either of them if they fail to avoid it.

Only difference between the original and the remake is the physical appearance. It is revealed in this remake that the Invincishroom was actually a Poison Mushroom that Captain Goomba found.

Various enemies attack by either using or throwing Poison Mushrooms at the Mario Bros. These may alternatively be refered to as Shroob Mushrooms.

Poison Mushrooms replace Cheep Cheeps as one of Junker's attacks.

In the Super Smash Bros Series

Throughout the series of Smash Bros, beggining in Super Smash Bros Melee, Poison Mushrooms reduce the size and weight of the character who consumes it. This is detrimental as it means they would be knocked off the stage easier. They often appear to look like normal Mushrooms until eaten.

In the Mario Party series

The Poison Mushroom debuts in Mario Party of this series. They are referred to as Poisonous Mushrooms and can only be obtained as one of two Mushrooms of the Mushroom Space (the other being the Super Mushroom). If a player is unfortunate enough to get a Poison Mushroom, they will lose the next turn. 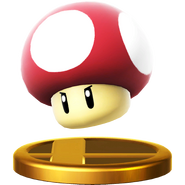 A Poison Mushroom's design in the "Super Smash Bros." series

A Poison Mushroom as it appears in "Paper Mario: The Thousand-Year-Door" and "Super Paper Mario"