Podoboos are fireball-like creatures/enemies that are commonly found in castles in the Super Mario series. They jump out of the lava in random spots of the level. Contact with a podoboo will cause Mario or Luigi to take one damage, losing all power-ups. In the Yoshi's Island series, Yoshi can swallow the Podoboos and gain limited fire breath. In New Super Mario Bros. Wii, they can be defeated by using the Ice Flower. Podoboo made its debut Super Mario Bros.. Podoboos also appear in the Mario Kart series. In more recent games, Podoboos will do a flip before landing back in the lava, and resemble a roundish jellyfish/octopus rather than just a fireball. Similar enemies called Embers from the Paper Mario series replace Podoboos as enemies in certain levels.

A Podoboo from the first game and a Podoboo drawing

The Podoboo in the older games 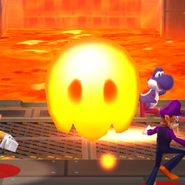 A Podoboo from Super Mario Galaxy 2. 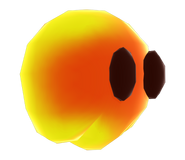 Mario as a Podoboo
Add a photo to this gallery
Retrieved from "https://mario.fandom.com/wiki/Podoboo?oldid=269913"
Community content is available under CC-BY-SA unless otherwise noted.