Piranha Plant ("Pakkun"/"パックン" in Japan), (sometimes spelt as Pirana Plant) and also known as Piranha Flower or simply Piranha, is a recurring enemy in the Mario series. It is a Venus fly trap-like enemy, almost always portrayed as a leafy green stalk topped with a white-spotted red head, bisected by a white lip mouth with sharp teeth. Instead of eating flies, he eats Mario and Luigi. They have shown up many times in the series, typically hide within pipes (sometimes pipes Mario can go into) and come out whenever something passes close by. Some species can also spit fireballs, called Venus Fire Traps. Others live entirely outside pipes, being either rooted in the ground or even walking about on root-like legs. When Mario is standing on a pipe, they have the tendency to stay in the pipe. Piranha Plants originally appeared in Super Mario Bros., making them one of the first and oldest enemies in the entire franchise.

On the television series based on Super Mario Bros., Piranha Plants made various appearances, usually acting as obstacles for the heroes, much as they do in the games. In the Super Mario Bros. 3 cartoon, Venus Fire Traps and Ptooie Plants were used in a manner similar to guns. In Super Mario Galaxy, they would instead be planted in a flower patch and moves as far as its stem will let it and try to attack Mario.

Piranha Plants return in Super Mario Bros.: The Lost Levels behaving the same as they did previously, in this game, they are more commonly found near dangerous pits making timing more crucial. Once again, Piranha Plants can be defeated with the effects of the Fire Flower or Starman.

In Super Mario Bros. 3, Piranha Plants act the very same as they did in the original except now there are a new species known as Venus Fire Traps, Piranhacus Giganticus, Nipper Plants, Munchers, and Ptooies. Venus Fire Traps are new types of Piranha Plants that can spit fire at Mario or Luigi with high accuracy. They can generally be defeated with the Fire Flower or any other damaging power up. Piranhacus Giganticus are larger Piranha Plants found in large pipes, Nipper Plants hop in the air trying to nip at Mario or Luigi, and Munchers are stationary Piranha Plants commonly found in rows and are indestructible. Ptooies are Piranha Plants that have a hovering spiked ball over their lips. Some Ptooies can walk, while most are stationary. All types of Piranha Plants in this game (except the Munchers) can be defeated with the effects of the Fire Flower, Starman, Hammer Suit, Tanooki Suit, and the Super Leaf.

In Super Mario 64 DS, Piranha Plants behave the same as they did in the original but this time, their appearance has been updated to match their look in the more recent games and to overall be more modernized. This time Piranha Plants can also be found in the new Goomboss Battle course. The same attacks can defeat them but Yoshi can also quickly defeat them by tossing an Egg at them.

In Super Mario Sunshine, regular Piranha Plants don't appear but several sub-species of Piranha Plants appear in the form of Polluted Piranha Plants, which was caused by Shadow Mario. A larger version of a Piranha Plant known as Petey Piranha appears as a boss in this game in the stage Bianco Hills. He mainly attacks with head smashes, tornadoes, and a goop spraying attack. Sphere-like Piranha Plants called Piranhabons and Piranha Heads are also formed from the goop.

Piranha Plants return in Super Princess Peach behaving as they did in the Yoshi series. They appear asleep but as Peach approaches, they start snapping. If she makes contact, they will swallow her only to spit her out thus doing damage. Peach can defeat a Piranha Plant by whacking it with Perry or by using Rage. Other types of Piranha Plants including the Glad P. Plant, the Nipper Plant, and the Sad Nipper Plant are also seen in this game. The boss of Ladida Plains is Boss P. Plant otherwise known as Petey Piranha.

An unused fully functional Big Venus Fire Trap also exists in the games files but was never used in any levels. It was going to act the same as a regular Venus Fire Trap only larger.

Piranha Plants return in Super Mario 3D Land where they behave the same as they did in the Super Mario Galaxy games. They can be found in many different levels of the game (more commonly in the plains and underground) and can be defeated with the effects of the Fire Flower, Starman, Super Leaf, Statue Leaf, and Invincibility Leaf. Two new sub-species of Piranha Plants also appear in this game including the Inky Piranha Plant (which spits ink at the screen obscuring your view a tad similar to the Blooper from the Mario Kart series), and the Fire Piranha Plant (which spits fireballs at you when you're within range similar to the Venus Fire Trap from earlier installments).

Piranha Plants are also among the enemies to be affected by the Gold Ring. Defeating them provides bonus Coins. If the Piranha Plant is piped, Coins will fountain out of the pipe it was in upon defeat.

Piranha Plants return in Super Mario Run behaving as they did in past 2D games. They can be defeated with the use of the Starman and commonly live in Pipes.

Piranha Plants appear in Super Mario World 2: Yoshi's Island and Yoshi's Island: Super Mario Advance 3. In this game, they are seen sleeping until Yoshi approaches them at which point they start snapping at him. If Yoshi makes contact with a Piranha Plant, he will be swallowed before being spat out and having to retrieve Baby Mario. Yoshi can beat a Piranha Plant by tossing an Egg, burning/freezing it with fire or ice breath, or by spitting another enemy or object out at it. Sub-Species of Piranha Plants also appear in this game such as Hootie the Blue Fish, Nipper Plants, Nipper Spores, and the Needlenose-spitting Wild Ptooie Piranhas. The boss of World 3 is a giant Piranha Plant named Naval Piranha who comes aided with her Naval Buds.

Piranha Plants appear in Yoshi's Island DS where they behave the same as they did before. Once again, they will make attempts to swallow Yoshi but Yoshi can beat them by tossing an egg at them, scorching them with his or Baby Bowser's fire breath, or by spitting another enemy or object at it. The Wild Ptooie Piranha returns alongside the Nipper Plants, Nipper Spores, and Nipper Dandelions. A new Piranha Plant sub-type called the Bungee Piranha also appears. The boss of World 2 is a overgrown Bungee Piranha called Big Bungee Piranha who is aided with his bodyguards the Bungee Buds.

Piranha Plants return in Yoshi's New Island acting as they did previously. Their attacks and ways to be defeated are the same as before. Their appearance has also been updated to match their look in the more recent games. They are more common at earlier points of the game and appear less towards the end.

There are also two different types of Piranha Plants known as the Megasmilax and the Smilaxs, which appear as bosses in this game. They are fought on Bean Valley and are extremely weak to Mallow's Snowy like the other Piranha Plants. The Megasmilax is capable of using the deadly Petal Blast move while the Smilax attacks with simple bite attacks.

In Super Paper Mario, Piranha Plants can now attack freely at Mario and the others. The Putrid and Frost Piranhas can use distance attacks, which can poison or freeze Mario and the rest forcing the player to shake the Wii Remote to break free.

In Paper Mario: Sticker Star, Piranha Plants are only present in World 3 and World 5 of this game. The Venus Fire Traps mainly appear in this game and are renamed "Fire Piranhas." They can attack by either biting Mario or spitting fireballs at him. 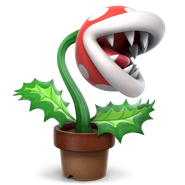 A Piranha Plant as seen in New Super Mario Bros. U 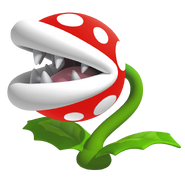