When Luigi and Spawny bumped into a Piranha Plant with a sleeping Rabbid on it they startled the plant and woke the Rabbid, as the Plant attempted to either eat Spawny or get the Rabbid off his head it scared Spawny, causing him to activate the Supermerge and fuse the plant and Rabbid into one, almost immediately Mario, Rabbid Peach, and Rabbid Luigi found and were attacked by the Pirabbid Plant, soon after they beat it and it unfused, though the Challenge suggests that it either ended fused together again, or was not the only on to be made. 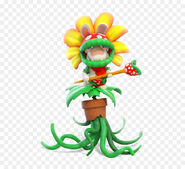 Add a photo to this gallery
Retrieved from "https://mario.fandom.com/wiki/Pirabbid_Plant?oldid=273080"
Community content is available under CC-BY-SA unless otherwise noted.