Turns Mario into Penguin Mario
The Penguin Suit is similar to the Ice Flower, except in addition to throwing ice balls the suit also gives Mario better traction on slippery ice, the ability to belly slide, and better swimming ability. The Frog Suit and Blue Shell are also similar in that they grant better swimming ability. If the ice balls hit an enemy, the enemy will be frozen, and can be jumped on to be used as a platform. The Penguin Suit first appears in World 3.

The Penguin Suit, along with the Propeller Mushroom, reappear in Superstar Road in New Super Mario Bros. U, functioning the same as before.

The Penguin Suit makes an appearance in Meringue Clouds. They only show up in one level. Luigi and/or one of the Toads can use it. 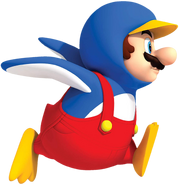 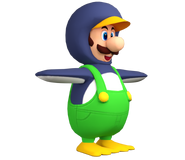 Luigi in the Penguin Suit.

Yellow Toad in the Penguin Suit.