Start a Wiki
watch 01:37
Who is Pauline?
Do you like this video?

Good
Pauline, also known as Daniella Verducci, was the original damsel-in-distress whom her love interest, Mario must rescue from the eponymous ape in the original Donkey Kong, which marked their debut. In the same way, Mario was originally called "Jumpman," Pauline was simply referred to as "Lady" in Japan. It was during the game's distribution in North America that she was given the name Pauline after Polly James, the wife of Nintendo of America's warehouse manager, Don James.

Following her first appearance in Donkey Kong, Pauline appeared in Family Basic and in Pinball for the Nintendo Entertainment System. Princess Peach, who was introduced in Super Mario Bros., took Pauline's place as the damsel-in-distress in that game, eventually becoming Mario's primary romantic interest in most of the subsequent games in the series.

Pauline did not appear in another game until the 1994 Game Boy version of Donkey Kong, where she was once again taken captive by Donkey Kong and his son. Whereas the original arcade game's cabinet depicts Pauline with blond hair, the Game Boy remake features a redesigned modern Pauline as a brunette, distinguishing her from the blond-haired Peach, wearing a sleeveless red dress with a torn skirt.

Pauline makes an appearance in Mario vs. Donkey Kong 2: March of the Minis for the Nintendo DS, where she appears as the guest of honor in the opening of the Super Mini-Mario World theme park.

Pauline made her appearance in Super Mario Odyssey, where she is the mayor of New Donk City. Kate Higgins voiced Pauline, who formerly voiced Tails the Fox and recently voices Princess Aurora and Tina Armstrong.

Though in the first Donkey Kong game she was just a damsel-in-distress and, as such, didn't play an integral part in the story of the game (as characters back then were merely mechanisms for players to navigate through the game without any interactions with the environments or other characters), in her more recent incarnation in the Mini-Land games she is represented as being sweet, laid-back and caring, as well as having a sense of humor and eye for business. She seems to think highly of herself but not enough to be considered egotistic; she also is kind-hearted and enjoys spending time with her friends. Given her clothes and makeup, she also seems to be quite fashionable.

In original Donkey Kong, Pauline's appearance was similar to Princess Peach's, she had blonde hair and was wearing a pink dress. In the Game Boy version of Donkey Kong, her body figure was different, she was taller, thinner, was wearing a tight red dress, big golden earrings, and black shoes and had brown hair. Nowadays she is wearing a beautiful red dress, golden earrings, a golden bangle on her left hand and black shoes. She also wears a lot of make-up: a purple eye shadow, red nail polish, and red lipstick. In Super Mario Odyssey she adds a purple hat and often wears a red pantsuit (with her high heels) while her dress in this game has sparkly details. The 3D Street Plaza puzzle "Nintendo Heroines" implies that Pauline was at least as tall as Princess Rosalina (herself one of the taller characters in the Mario franchise).

Pauline made her appearance in Donkey Kong as the damsel-in-distress who was kidnapped by Donkey Kong.

Marking her debut in the main Super Mario series, Pauline appears in Super Mario Odyssey as the mayor of New Donk City; here, she is addressed as Mayor Pauline.

She first appears shortly after Mario arrives at New Donk City, where she alongside several New Donkers observes Bowser's Airship in the sky and the city being hit with a torrential downpour. She then explains to Mario she can't talk with him because New Donk City's currently in a crisis: She explains that Bowser had arrived at the city and has been causing chaos, and admitted she was not impressed with his plastering posters advertising his planned wedding with Princess Peach, stating it was "tasteless". Afterward, she then thanks Mario for saving the city as it meant everything to her, and invited him to set up the city festival.

Here, Pauline asks Mario to help rebuild her band, for which she serves as the lead singer. After that, she then tasked Mario with checking out the underground power plant and restore power. Ultimately, by the time Mario arrived at the power plant, Pauline was present, as she decided to assess the situation herself and deduced Bowser was responsible for the sabotage. They then fixed the power together, and then she personally invited Mario for the New Donk City festival as the guest of honor to repay him for making the festival possible.

She is the interpreter of Jump Up, Super Star! , the theme song of the game. In addition, the reason she returns and acts as mayor of New Donk City is to avert the idea that the presence of a kingdom necessarily means that the people in charge are royalty.

She is later seen at the wedding between Bowser and Peach on the Moon Kingdom just as Mario enters, having been forced by the former to attend. She tells Mario he's "just in time."

In the post-game, Pauline can quiz Mario on facts about herself. She said that her hat is her favorite possession,[1] she loves eating cake,[2] and that her capture in Donkey Kong was "traumatic", although it helped her grow as a person.[3] Her hobby was also mentioned that she loves taking walks around the city.[4] Pauline mentioned that she is bad at fixing machines and does not get along with them.[5]

Pauline becomes a playable character for the first time ever in Mario Tennis Aces and the way to unlock the character in her release was to play an online tournament during a specific period of time, but a month after she became available for every player as free DLC. She is a speedy type of character.

Pauline is one of the two highlight characters in Mario Kart Tours New York Tour. Her special item is the Lucky Seven. Her favored courses are:

Pauline appears in Ultimate as a primary spirit. Her Odyssey artwork was reused in the game. The player must defeat the puppet fighter of Peach in her red costume.[6] Although there are three conditions that are displayed onscreen, they are more conditions such as enemy avoiding the player.

Pauline from the original Donkey Kong

Pauline from Mario vs. Donkey Kong 2: March of the Minis 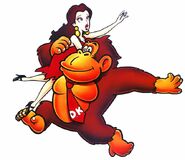 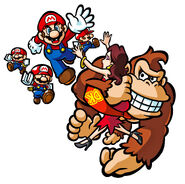 Artwork for Mario vs. Donkey Kong 2: March of the Minis

Pauline, under the name Daniella in the Super Mario Bros. film

Pauline's trophy in Super Smash Bros. for Wii U 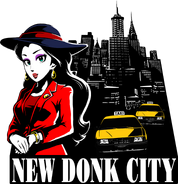 Pauline in her mayor suit 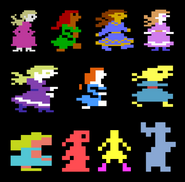 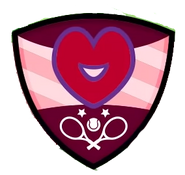 Pauline (Party Time) from Mario Kart Tour.
Add a photo to this gallery

A
Retrieved from "https://mario.fandom.com/wiki/Pauline?oldid=271498"
Community content is available under CC-BY-SA unless otherwise noted.