MarioWiki
Register
Don't have an account?
Sign In
Advertisement
in: Articles in need of cleanup, Enemies, Goombas,
and 21 more
English

Paragoombas (originally formatted as Para-Goombas and also known as Winged Goombas) are recurring enemies in the Mario series. They are a winged variation of Goombas, similar to Paratroopas, winged variations of Koopa Troopas. In order to inflict damage upon them, Mario must jump on top of them to knock them out of the air after which it will lose it's wings and become a standard Goomba. Depending on the game, Paragoombas can only do small hops with their wings or they can fly in the air similar to red Paratroopas. In most games, Paragoombas are enemies but a few recent games have made them playable.

Para-Goombas made their debut in Super Mario Bros. 3, in which they appear as somewhat common enemies. The first Para-Goomba appears after the Goomba after the ? Block (which contained a Super Leaf) in World 1-1. There are two types of Para-Goombas, the Red Para-Goombas which attack by hopping low along the ground, with a larger jump every third hop, while brown ones attack by flying in the sky and dropping Micro-Goombas which can slow Mario down. Para-Goombas appear in most worlds and can be defeated with basically any attack. Two stomps are required to defeat a Para-Goomba the first is to knock loose the wings and the second to finish it off.

Ordinary Paragoombas do not appear in Super Mario World; however, the localization team at the time gave the name to a similar but different species (Kuribon, later called Galoomba). As such, there are two equivalents of Para-Goombas in name and function: Para-Goombas (Para Kuri in Japan) utilize parachutes, and Winged Goombas (Pata Kuri in Japan) have wings.

Para-Goombas appear in Super Mario Land 2: 6 Golden Coins, acting like the red ones in Super Mario Bros. 3. However, their artwork depicts them as being brown. In Pumpkin Zone Special Area 1, they instead fly around. They once again can be defeated with any attack.

Many species of Paragoomba appear in Super Princess Peach. First appearing in Ladida Plains, Paragoombas fly randomly along the screen. Along with regular Paragoombas, Red Paragoombas make a reappearance from Super Mario Bros. 3, which hop and flutter around, regular Paragoombas can fly high and drop Micro-Goombas on Peach. Paragoombas like other enemies in the game, also have emotional variants.

Mad Red Paragoomba (M. Red P-Goomba in the glossary) are first encountered in Fury Volcano and go onto appear in later worlds too, which charge at Princess Peach on sight. If they fall off a ledge, they can cling to the cliff and fly back up.

Sad Paragoombas are the Sad variant, and unlike the regular Paragoombas, they fly around and have a set flying pattern, but fly faster.

Paragoombas appear very rarely in New Super Mario Bros., only being found in a single level, World 2-4, where only three of them appear. They act mostly like the red ones in Super Mario Bros. 3, despite being brown, periodically hopping around but never actually flying. They do higher hops during the "bah" instances of the music.; when Mario jumps over them, they turn behind and follow him. One stomp knocks loose their wings turning them into regular Goombas, two stomps defeat them, and a Ground Pound along with any other means of attack takes them out instantly.

Paragoombas appear in New Super Mario Bros. Wii. They act just like they do in its predecessor, but they are slightly more common. They only appear in World 7-5 and World 8-2. Like other enemies, Paragoombas can now be defeated with a Spin Jump, which does the same effect as a ground pound; it takes out a Paragoomba instantly, any other attacks can also instantly do in a Paragoomba, once two stomps are required to beat a Paragoomba.

In Super Mario Galaxy 2, Paragoombas appear as an enemy once again. However, instead of hopping on the ground, they can actually fly up and down or side to side. This is the first time that Paragoombas appear in a 3D Super Mario platformer game. There is also a giant form of Paragoombas in Supermassive Galaxy called the Huge Paragoomba. If Mario jumps on them, they get flattened and disappear, instead of becoming a regular Goomba; the latter only happens if they are licked by Yoshi or spun into. They are one of the few enemies that did not appear previously in the predecessor. Paragoombas are commonly found in various Galaxies such as the Hightail Falls Galaxy, Tall Trunk Galaxy, the Throwback Galaxy, and several others.

Paragoombas return in New Super Mario Bros. 2 behaving as they did in past games, first appearing in World 2-2, Paragoombas hop around and do small floats as before. Paragoombas are among one of the enemies to be affected by the Gold Rings, when activated, they become Gold Paragoombas and provide bonus coins upon defeat. Paragoombas take two stomps to defeat. One to knock loose the wings and second to finish it off, other attacks such as the Fire Flower, Starman, Super Leaf, Mega Mushroom, Gold Flower, or the Invincibility Leaf can defeat a Paragoomba instantly.

Paragoombas appear in Super Mario Maker as well as it's two sequels. In these games, they can be produced by applying wings to a Goomba. Their behavior is the same as before and they can be seen in all the styles. A Paragoomba can be given a Super Mushroom to become a Huge Paragoomba. Paragoombas can be defeated with any attack in all themes.

In Super Mario Odyssey, Paragoombas are rather uncommon enemies in this game. They are mainly found in Cap Kingdom flying across the fog. Mario can Capture them with Cappy in order to fly around as well. This can be used to gather some Power Moons. Paragoombas are also found more commonly in bonus areas of various kingdoms such as the Metro Kingdom and several others, Paragoombas are commonly useful for obtaining hidden Power Moons and other secrets but in any case if you need to defeat a Paragoomba, a stomp can easily do that.

In Paper Mario, Paragoombas appear as the third enemy, excluding Jr. Troopa. They first appear on Goomba Road while Mario is making his way back to Goomba Village. With Goompa temporarily in the party, he informs Mario of Paragoombas briefly.

The Tattle screen for a Paragoomba

Paragoombas in the second animated series.

Paragoomba's return in Paper Mario: The Thousand-Year Door with a lessened role. Paragoombas can be encountered in earlier locations such as Rogueport Sewers, Petal Meadows, and Hooktail becoming less common later in the game. Their role in battle reminds the same being air enemies that Mario must jump on to attack.

Paragoombas also appear in Paper Mario: Sticker Star, in this game, their appearances have been updated to be more modernized. Paragoombas are first seen in the Goomba Fortress controlling the wind trap on the side of the Fortress, they are later seen more commonly in World 2 being found in all the world's levels except Damp Oasis. Paragoombas are also seen in Bowser's Sky Castle. A stronger variety of Paragoomba called the Shiny Paragoomba also appears.

In battle, Paragoombas attack by flipping onto Mario, Mario can defeat these enemies with stomps and other similar attacks, Hammers won't work as the Paragoombas can dodge those. Shell attacks as well as the Fire Flower and Ice Flower are useful as Paragoombas descend during the attack thereby making the attack effective. Paragoombas only have 6 HP in battle which is only 1 more than a standard Goomba.

In Drybake Desert, there are 5 Paragoombas bullying a Toad, Mario can fend them off by either paying them 25 Coins or engaging them in battle, if he chooses the latter, the Paragoombas will form into a 5-Fold Paragoomba at the battle's start.

Artwork Render of a Paragoomba (SMB3) 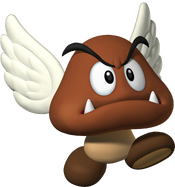 A Paragoomba dropping some Micro-Goombas down below (Super Mario Bros. 3).

A Paragoomba, throwing several of its Micro-Goomba children to Mario.

A Paragoomba dropping several Micro-Goombas on Mario who itches them off. 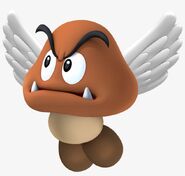 A Paragoomba as seen in New Super Mario Bros. 2

A Paragoomba wearing a Top Hat as seen in Super Mario Odyssey.