Turns empty bricks into coins and vice versa, makes blue coins appear.
P Switches (Switch Blocks or P-Switches) are switches that appear in the New Super Mario Bros. series, usually inside Brick Blocks or Question Blocks. They temporarily turn empty Brick Blocks into coins and vice versa. In some cases, they also make Blue Coins appear (also temporarily). If the player collects all the blue coins before they disappear, a clapping sound is heard.

P Switches first appear in Super Mario Bros. 3. They invert blocks to coins and coins to blocks, but they have a limited time.

This is the only game which Mario or Luigi can carry the P-Switch. It also introduces the Gray P Switch. The Gray P Switch can invert enemies into Gray Coins.

In Mario & Wario, it does not have the "P" engraved on it, but switches between solid and untouchable. 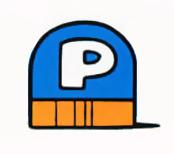