watch 02:34
Wiki Targeted (Games)
Do you like this video?
Play Sound

Nintendo Land is a game that was released for the Wii U in November 2012. It is a party game, like Mario Party, and features minigames based on some of Nintendo's popular games, such as The Legend of Zelda, Metroid, Pikmin, Animal Crossing, Donkey Kong, Mario Bros., Luigi's Mansion, the Yoshi Games, and more. The game was received well by fans, gaining scores of 77.80% and 77% on game ranking sites. It has sold more than 2.60 million copies as of March 2013, making the second most popular selling Wii U video game next to New Super Mario Bros. U. It was a pack-in title for many Wii U systems. 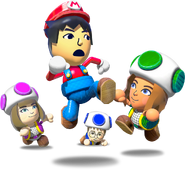 Artwork from Mario Chase.
Add a photo to this gallery

Attention MarioWiki users!: This article is too small or lacks sufficient information. Whether you are commenting or editing, we would be pleased if you help MarioWiki by expanding it.
Retrieved from "https://mario.fandom.com/wiki/Nintendo_Land?oldid=312066"
Community content is available under CC-BY-SA unless otherwise noted.