MarioWiki
Register
Don't have an account?
Sign In
Advertisement
in: Enemies, Enemies in Super Mario Bros. 2, Characters in Paper Mario,
and 10 more
English

In Super Mario Bros. 2, they jump up and down continuously in place or move around, in which case they jump when near the player. Like most enemies from Super Mario Bros. 2, they could be picked up, whether moving around or in place. They later appeared in Super Mario World and instead of staying in place and jumping, they would move around at a speed that's faster then Koopa Troopas, and when coming across an obstacle that's in the way, a hole in the floor, or a cliff edge; they'd automatically jump to get past it.

Ninjis appear in Super Mario Maker 2 via Ninji Speedruns. Once you complete the scheduled speedrun, you can race against other players in the form of a transparent Ninji.

Their next appearance is in Super Mario Run. They have the same characteristics, but Mario can double jump off of them.

In Paper Mario, Ninjis appear in the town Starborn Valley and are great friends of Merlon and his son Merle.

Ninjis return in Paper Mario: Sticker Star as enemies. They are fought most of every level in World 3. They attack mainly by jumping at Mario and turning themselves into Throwing Stars and hurling themselves at Mario. They also have a habit of using decoys, making to believe that Mario is attacking the real them. They have an HP of nine.

Ninji reappears in Paper Mario: The Origami King, in origami form. They appear mostly in Ninja Attraction in Shogun Studio. Before fighting, they tend to hide themselves in the environment before secretly reveal themselves and chase Mario. In combat, they swap themselves with logs, whenever Paper Mario uses Hammer attacks. When they have a chance to attack, they would throw shurikens, do normal kick, or teleport on top and slam down on Mario. 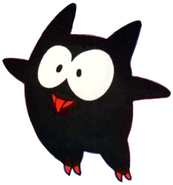