The Mushmellow is a kart appears in the Mario Kart series. The kart itself seems to be similar to the Egg 1 as they both are a character's trademark as a kart itself. The kart appears to slightly resemble a Mushroom Car from Mario Kart: Double Dash!!, and is shaped like a Super Mushroom with small wheels.

The Mushmellow debuted in Mario Kart DS, as Toad's first Exclusive kart. His other karts include his standard kart, the Standard TD, and his unlockable Exclusive kart, the 4-Wheel Cradle. The Mushmellow features great acceleration, but has low speed, weight and items stat, whilst handling and drift are above average.

During gameplay, only Toad can use the Mushmellow. However, if the player completes all 150cc Nitro or Retro Grand Prix cups, Yoshi and Dry Bones can use this kart. To let any character use this kart, the player must complete all cups in the Mirror Mode. 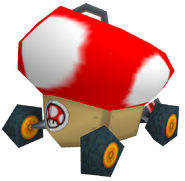 Toad in his Mushmellow racing on GBA Sky Garden. 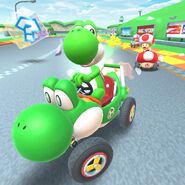