MarioWiki
Register
Don't have an account?
Sign In
Advertisement
in: Characters, Mario Kart 7 Characters, Characters not from the Mario Universe,
and 11 more
English

Nintendo
Miis are a type of person that can be created on a Wii, 3DS, Wii U, or Nintendo Switch via the Mii Channel/Mii Maker. They also appear in two different outfits as unlockable drivers in Mario Kart Wii. The first outfit is unlocked by winning the 100cc Special Cup, and the second outfit is unlocked by unlocking all thirty-two Expert Staff Ghosts in Time Trials mode. They also appear as playable characters in Mario Super Sluggers, Mario Kart 8, and Mario Sports Mix.

Miis are playable in Mario Party 8. However, the Mii is not playable in the main game and instead can only be played in the minigames in the Extra Zone.

Miis are compatible with Mario Kart Wii. They can be any size, depending on their height. This makes them the most versatile characters. Miis aren't available from the beginning of the game and must be unlocked. The Mii's voice also varies depending on the color their shirt is. Also, Miis from the Mii plaza sometimes appear in the crowd cheering, or on statues in some tracks. Miis have two outfits: Mii Outfit A and Mii Outfit B. Mii Outfit B gives a Mii Mario's overalls or Peach's dress, depending on the Mii's gender.

Miis are unlocked in Mario Kart 7 for the 3DS, with new voices (the Mii's voice depends on gender and color of clothing). They are unlocked by completing the 50cc Grand Prix. Unlike Mario Kart Wii, they cannot change costumes, and stay in a jumpsuit similar to the ones used by actual racers.

Miis can be used as playable characters in Mario Tennis Open. In the Clubhouse, the player can buy new gear for their Mii, which will change its stats. Costumes can also be unlocked for them.

Miis are unlockable in Mario Kart 8. They have different voices from Mario Kart 7 and Wii. They have a jumpsuit like in Mario Kart 7, but this time they also have a helmet. The costumes are unchangeable once again. Their kart size and voice depends on how tall and wide the Mii is. You can also give Miis Outfits with amiibo.

The player can use their Mii Character in New Super Mario Bros. U during both Challenge Mode and Boost Mode. They use the same voice clips from Mario Kart 7 and appear in costumes of Mario, Luigi, Wario, and Waluigi. In Boost Mode and Challenge Mode, Mii Characters can be seen in the background of stages, cheering the player on.

The Miis are playable in Super Smash Bros. 3DS/Wii U and Super Smash Bros. Ultimate. They are known as "Mii Fighters." There are three different Mii Fighters, each with a unique moveset: Mii Gunner, which is the most defensive, normally and specially, Mii Brawler, which is good at agility like in running and wall kicks, and Mii Swordfighter that is the most powerful of them all, normally and specially. 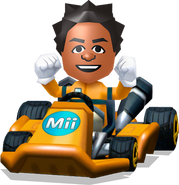 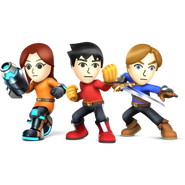