"Mario! Take this and save all worlds from destruction!"
― Merlon

Merlon is a recurring character in the Paper Mario series. He appears in a long robe, covering his entire body except for his long beard.

In Paper Mario, Merlon appears in his house in this northern plaza of Toad Town. His house is in front of the castle gate with a blue spinning roof. Throughout the game, Mario can visit Merlon who will give him information regarding the next mission, where to go, or what type of adventure the next chapter holds.

If Mario uses the Ultra Boots to hit the attic of his house, Merlon will give the Quick Change badge, which falls from the rafters, to Mario.

"He's a stubborn and mysterious old man. His name is Merlon. He uses magical powers to look into the future. I've listened to his stories before and they're really long. I try to pay attention but... sometimes I fall asleep. Still, his fortune-telling is supposedly right on. I don't know personally, but my Goompa told me."
― Goombario's Tattle

In Paper Mario: The Thousand-Year Door, Merlon lives next door to Professor Frankly, an esteemed professor of archaeology, on the east side of Rogueport. For three of Mario's Shine Sprites he would upgrade one of his team members, giving them more hit points and a new ability. With the power of the Ultra Stone, he can upgrade Mario's party even further. The Ultra Stone is Thousand-Year Door is obtained by using a similar method of getting quick change in the first game. This is most likely a reference to the original Paper Mario.

In Super Paper Mario, Merlon resides in city of Flipside and possesses the sacred Light Prognosticus, which was made to counter the powers of the Dark Prognosticus. He was the one who found the wounded Timpani and transformed her life energy into a pixl, Tippi, to save her life at the cost of her memories. Merlon owned the first Pure Heart that was needed to open the first door, to Lineland. He has a parallel version of himself, who is named Nolrem, Merlon spelled backward; Nolrem resides in Flipside.

The outside of Merlon's house in Paper Mario

The inside of Merlon's house in Paper Mario 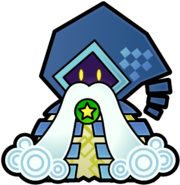