Bowser Jr.'s ship before it attaches to the body, disassembled form encountered when it is in Bowser Jr.'s Boom Bunker

Nintendo
*The Megahammer is one of Bowser Jr.'s robots appearing in Super Mario Galaxy 2. This robot can be found in Bowser Jr.'s Fearsome Fleet, a location at the end of World 3. It is fought on a ringed planet made of metal. After he is defeated, the Megahammer can be seen on the Starting Planet of Bowser Jr.'s Boom Bunker, this time broken. However, his Bill Blasters still work, which is necessary to bust open the cage on his right arm so Mario can use the Cannon to make his way deeper into the galaxy.

When the Megahammer makes his entrance, Bowser Jr.'s pod grows a mask and attaches itself to a robot body. This battle requires use of Yoshi. There are Yoshi eggs appearing around the ring. Megahammer releases Bullet Bills and Banzai Bills.

He is large mostly green orb-like robot. He has Bowser Jr's pod underneath it's head. The head is white with glowing plus-sign like eyes that are yellow. The arms are long with hammers for hands. The chest has light blue glasses and the one on the back is larger. The chest also has two Bill Blasters.

When the battle starts, Mario must gather Yoshi (if the former hasn't already) who can use his tongue to grab a Bullet Bill that can shoot at Megahammer's blue glass-like orbs to break it as an attack. Afterwards, Yoshi must gather a Bullet Bill with his tongue and shoot it at Megahammer. If not shot on an orb, it won't affect Megahammer. Sling Stars occasionally appear for Mario and Yoshi to shoot at the back of Megahammer instead of walking for a long time to reach the back. However, Megahammer will unleash a shockwave from his middle in retaliation. Megahammer's most powerful attack is a hammer slam which occurs only after one of his orbs is broken.

When Mario and Yoshi successfully attack all of Megahammer's blue glass orbs, Megahammer opens his head with glass on it so Mario can use Yoshi to get a Bullet Bill to shoot the glassy part twice when the robot performs his hammer slam attack to fully defeat Megahammer and to move onto World 4. 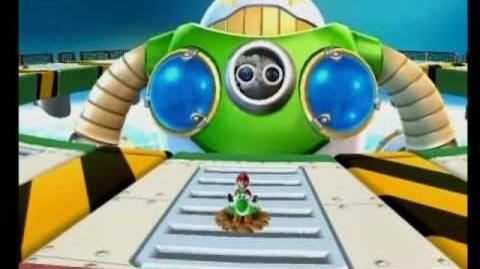