MarioWiki
Register
Don't have an account?
Sign In
Advertisement
in: Enemies, Cheep Cheeps, Enemies in New Super Mario Bros. U Deluxe,
and 5 more

In all three versions of these games, Mecha Cheeps make their first appearance (in the original, Wii U version). They are found in The Mighty Cannonship, where they swim straightforward. Because of their larger size compared to their organic counterpart, they're harder to dodge. They also cannot be defeated by fireballs. However, they can be frozen and defeated if they are floated to the top of the ceiling while frozen. They can also be defeated with the effects of a Starman or by luring a Targeting Ted at them. 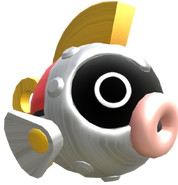