The game was first shown at E3 2002 as Donkey Kong Plus, which was like an improved version of Donkey Kong 94'. The only known differences were the graphics and the player can make their own levels on the Game Boy Player, then using a link cable send them to the Game Boy Advance using a link cable. However, the game vanished the following year, until Mario vs. Donkey Kong came out, with the level editor gone and the graphics were replaced with pre-rendered graphics. However, the game's sequel, Mario vs. Donkey Kong 2: March of the Minis had this feature and took advantage of Wi-Fi Connection.

The game's story begins with DK watching TV. As he flicks through the channels, he sees an ad about the Mini Mario Toys. He is disgusted with them but, still, DK falls in love with the toys instantly. He goes to the Toy Store, but they are sold out. DK turns around and sees the Mario Toy Company and decides to loot the store of all of the toys. Eventually, DK checks his bag, only to see all the Mini Marios he stole have dropped, with Mario, the toys, and 3 Toad employees laughing at him. In anger, he grabs the 3 Toads, climbs the building, and Mario must rescue the 3 Toads and fight Donkey Kong again. However, he must make his way through the 6 worlds to get to the battle on the top of the building. After the fight, he falls off onto a truck full of Mini Marios, and steals five more. Mario gives chase once again, until a similar cutscene of the one before the defeat, but only Mario laughs, until 6 Mini Marios come out. After that, it is the final scene. Mario is scolding Donkey Kong for what he did. Donkey Kong is crying in pity and shame. Mario cheers him up by letting him have a Mini Mario. The Mini Marios and Mario cheer with Mario's mission successfully done. 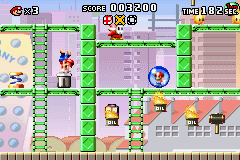 Each of the games six worlds is divided into eight levels. For the first six levels within each world, Mario must find a key and open up a door to the second half of the level. There, Mario will find the toy that DK dropped. The seventh level in each world is a Mini-Mario level. Mario leads the six mini Mario toys he collected back to their toy chest; however, he must make sure they avoid obstacles along the way. This leads into a battle with DK, with each Mini-Mario saved becoming a "hit point". For example. If Mario saves all six of the Mini-Mario toys, he'll be able to be hit six times by DK before losing a life. If the player fails to defeat DK and chooses to replay the fight without doing the Mini-Mario level, Mario will start the fight with four hit points.

After beating the six worlds, DK will fight Mario. After being defeated, six "Plus Worlds" are unlocked, numbered 1+, 2+, and so on. In the Plus Worlds, Mario must get to a Mini-Mario holding a key and lead it to the exit doorway. There is only one part per level in the Plus Worlds, and they are designed to be more difficult than the main worlds. There are still DK boss levels in the Plus Worlds.

After beating all of the Plus Worlds, Mario fights DK once again, for the final time. There's also something good in Mario vs. Donkey Kong. There are expert levels which are the hardest in the whole game. The only way to access them is to get stars for every level(except major boss levels).

Retrieved from "https://mario.fandom.com/wiki/Mario_vs._Donkey_Kong?oldid=23063"
Community content is available under CC-BY-SA unless otherwise noted.