Mario opens his 3rd theme park of mini toys with Pauline, and gives a new Mini Pauline toy to the first 100 guests to visit. Donkey Kong rushes in to get one, only to find out that he is the 101st guest to arrive. Donkey Kong, in a rage, decides to take the real Pauline instead, forcing Mario and his Mini Marios to rescue her. After completing the normal Story Mode, it looks like Pauline is saved, until Donkey Kong reappears and kidnaps her again. If the player wins the final boss of Plus Mode, the following cutscene shows Mario and Donkey Kong confronting each other again, over Pauline. In the end, Mario finally decides to give Donkey Kong a Mini Pauline.

Every numerical world has ten levels total: eight normal levels, a boss battle, and a mini-game that is unlocked if the player collects all nine Cards in the other levels. Every 4th and 8th level of those worlds is always a Multi or Key level respectively. World F only has one level featuring the final boss. World S has 20 levels that are unlocked with every 10 M-Coins the player collects in Story Mode. World X has 10 expert levels; one is unlocked for every 10 Trophies the player earns in Story Mode.

In this puzzle game, the Mini Marios must be guided to the Exit Door to complete a level. The player moves objects or obstacles to guide them to the exit. There are some levels with gimmicks to them: Multi levels require Mini Mario to break the other Minis out of capsules and the player to guide them to their respective doors; Key levels require the Key Mini Mario to unlock the Exit Door. World 6 is the only world with Magnet levels; if a Mini starts walking on the magnetic paths, they can go sideways or upside down depending on the path. After completing Normal Mode, in order to really finish the game, Plus Mode must be completed. Unlike Normal Mode, all of the Mini Toys must enter the Exit Door(s) in a specific order.

Donkey Kong is the boss of every battle. He sits on a platform on the DS's top screen, with Pauline begging to be saved behind him. The player has a maximum of 6 Mini-Marios that have to reach weaponry to damage Donkey Kong. Sometimes he will ground-pound and make obstacles or enemies drop to the ground. When he is defeated, he escapes the platform before it crumbles to wait in the next world. In the final boss, Donkey Kong will cling to a Ferris wheel and move it in the player's way. The player has to fire Mini Marios from a cannon to hit him while he's vulnerable.

The first eight worlds feature a mini-game level that is unlocked if the player collects all nine of the Cards in the other nine levels. The player has to move objects to get the falling Minis into boxes with stars on them; boxes with X's will subtract points from the score. Every Story Mode world with an even number features colored boxes instead; each corresponds to one of the five Minis, and if the Mini enters the wrong box, no points are awarded.

The player can create their own levels with materials and objects they've unlocked by playing through the story. Before the DS servers were shut down, players could share their custom levels across the internet. 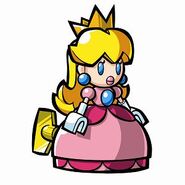 Retrieved from "https://mario.fandom.com/wiki/Mario_vs._Donkey_Kong:_Mini-Land_Mayhem!?oldid=310035"
Community content is available under CC-BY-SA unless otherwise noted.