watch 03:41
Wiki Targeted (Games)
Do you like this video?
Play Sound

Mario Tennis Open is the sixth installment in the Mario Tennis series. It is for the Nintendo 3DS, first released on May 20, 2012. The game features gyroscope support and online multiplayer (using the Nintendo Network procedures). Several voice clips are reused from Mario Power Tennis.

The gameplay features the traditional basic elements from previous Mario Tennis games, utilizing the buttons of the 3DS during gameplay single or multiplayer matches. Players can perform various different tennis shots by selecting the shot panels on the touch screen.

Chance Shots may appear if the opponent performs a bad rebound, in that case, a small colored area with a symbol of a Mario enemy or item appears in the player's court. To perform a chance shot, players have to perform the shot whose color corresponds to the colored area when they are in the area, either by pressing the correct button or button combination or by touching the matching color on the touch screen, otherwise, the shot is a normal shot. However, players can perform a simple shot that automatically selects the appropriate shot, but this Chance Shot is weaker. Players on the receiving end of a Chance Shot may negate the effects by using a shot with an opposing spin.

When preparing a shot, note that the buttons will function similarly to a dead-key on a keyboard.

Note: Double tapping any of the single button shots will increase their strength and capability

Like in all Mario Tennis games, Tournaments can be played either in Singles or Doubles. Every tournament consists of a standard 8 player tournament. You must play through each of them in order to unlock the next one. However, once they are all unlocked, you may play them in any order of your choosing.

The Mushroom Cup is played on the Mushroom Valley court, and is the easiest of all tournaments. (Unknown AI level)

The Flower Cup is played on the Wario Dunes court, and is a little harder than the Mushroom Cup. (Unknown AI level)

The Banana Cup is played on the DK Jungle court, and is harder still. (Unknown AI level)

The Champions Cup is played on the Mario Stadium Courts, which is played on 3 different courts, the Hard Court, the Clay Court, and the Grass Court. This cup is the hardest of the 4 cups, after you complete the Championship cup in singles, you unlock the Star version of whichever character you played as. Beating this unlocks Pro AI in Exhibition mode. (Unknown AI level)

Due to the difficulty of the Star Open, only star characters are allowed to enter. Once again, you must play through each of them in order to unlock the next cup

The 1-Up Mushroom Cup is played on the Peach's Palace Court, and eases you into the Star Open. (Unknown AI level)

The Ice Flower Cup is played on the Penguin Iceberg Court, and is a little harder than the 1-Up Mushroom Cup. (Unknown AI level)

The Shell Cup is played on the Bowser's Castle Court, and is harder still. (Unknown AI level)

The Final Cup is played on the Galaxy Arena with Morph Court, and uses Pro AI. Beating this for the first time will unlock Ace AI.

In Exhibition Mode, you just simply play tennis matches, either Singles or Doubles. You get to pick the difficulty level of the CPU, either Novice, Intermediate, Expert, and later on, Pro and Ace. You then pick whatever Court you want to play on. Finally you pick how many sets and games you want to play, either 1, 3, or 5 sets, and either 2, 4, or 6 games to a set.

These games earn you coins, you can use them to buy clothing parts for your Mii in the Item Store.

You must hit the ball through golden rings in order to earn a certain amount of points before time is up. You can get more points by hitting the ball through 2 or 3 or even 4 rings at once than just hitting it through one at a time.

You go through redesigned classic Super Mario Bros stages. You must get the ball to the flagpole at the end before time runs out. You need to add on to the remaining time by earning points.

You must complete a certain number of rallies without missing 3 times. It becomes challenging, because the opposite court side consists of 4 disappearing tiles that disappear each time you hit them, thus creating a hole in the court in which you cannot hit balls to. As soon as you hit another tile though, the previous hole gets filled back in and a new hole appears in the space that you just hit. After 40 rallies, it becomes less predictable as another hole appears. After 80 rallies, only one space remains as floor.

You must score a certain amount of return aces. Sometimes you will also get ink balls spit at you, if you don't hit them, they ink up your screen, making it harder to see.

Players can unlock various clothing items in which to equip their Mii with by simply playing tennis matches, either in Exhibitions or Tournaments. The items are unlocked randomly as you play games, there is no set order in which they unlock, so the last item that one person unlocks may be the first item that someone else unlocks. The items are then up for sale to buy in the item shop with coins earned from the Special Games. The items come in various sets of clothing, as 4 different parts: Racket, Uniform, Wristbands, and Shoes. When you equip your Mii with clothing, it gets a special boost in stats based on which clothes you used, the stat boost is greater if you equip an entire set. The numbers shown are the prices of each item in terms of coins. In order to buy every single item from the shop, you would need a total of 158,350 coins.

There are also several rackets that don't have clothing to go with them, but have costumes that go with them instead.

Next, there are a couple rackets that don't have a specific set or costume to go with them, but they fit in with other sets or costumes.

There is also one last racket that doesn't fit in with any of the clothing sets or costumes.

Finally, there are a few clothing sets that don't have any one racket that go with them. Instead, they all go with one particular racket, the Yoshi Racket.

There are various costumes that the player may unlock for his/her Mii. Much like the sports gear in the Item Shop, the costumes have different effects on one's Mii abilities.

There are various items and playable characters unlocked via the QR Code screen accessed by pressing Up+Start on the File Select Screen. Each region might doing something different for these in a different order. 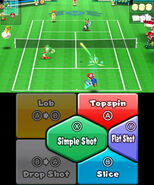 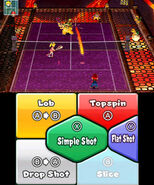 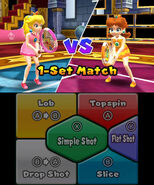 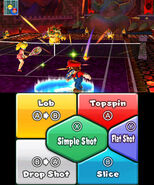 Retrieved from "https://mario.fandom.com/wiki/Mario_Tennis_Open?oldid=311997"
Community content is available under CC-BY-SA unless otherwise noted.