Mario Party Superstars is an upcoming party video game developed by ND Cube and published by Nintendo for the Nintendo Switch. It is the twelfth main installment in the console Mario Party series. The game features five game boards from the first three Mario Party installments as well one-hundred minigames from throughout the series. It is often considered as the true successor to Mario Party: The Top 100 for the Nintendo 3DS. [1] 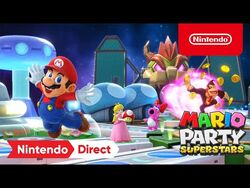