Mario Kart 8 (Japanese: マリオカート8 Mariokāto 8) (often abbreviated to MK8) is the eighth installment in the Mario Kart franchise (eleventh including the arcade games). It was released on May 30th, 2014 for the Wii U game system. The game primarily focuses on the new anti-gravitational mode added into it. A prominent new addition is anti-gravity, allowing players to drive on almost any surface. Elements from Mario Kart Wii and Mario Kart 7 are reused, such as Bikes and 2-Player online from Mario Kart Wii, and gliding, underwater driving, and kart customizing from Mario Kart 7. In addition, ATVs join the returning karts and bikes as a new class of vehicle. The game also features more detail in courses, specifically Retro Tracks, which appear more redesigned than their original appearances. The game is also the best selling title for the Wii U, selling 7.64 million copies as of 16 Mar 2021, surpassing sales of both Mario Kart: Super Circuit and Mario Kart: Double Dash!!, including many new power-ups! With a Verison With Nintendo Switch and Mario Kart 8 Deluxe It Was release on April 28, 2017.

The gameplay is similar to most traditional Mario Kart games. The main karts use a similar design from Mario Kart 7. Along with the design, gliders return along with the vehicles being able to ride underwater. Bikes, which were introduced in Mario Kart Wii, are also back but cannot do wheelies voluntarily (they happen automatically when driving over a boost pad or using a Mushroom) like before. Also, ATVs join karts and bikes as a new vehicle class. The game introduces anti-gravity tracks that allow the players to race on vertical and upside-down roads, and if two anti-gravity racers bump into each other, they will both spin around and receive a burst of extra speed. The tracks are also more narrow than other courses. Coins also return, but like Mario Kart 7, players can only carry 10 at a time.

Twelve racers at a time return from Mario Kart Wii. As a new addition, bike and kart headlights turn on when the player is in a dark area. In an interview, a producer of the game, Hideki Konno, has said that a Mario Kart Double Dash!! style mode was under consideration, which means two racers can ride on one vehicle. In the final version, players hold items like they do in Mario Kart Double Dash!! However, if the player has a triple item behind or around them, they cannot pick up another item at the same time.

Battle mode is also changed, as it uses race tracks instead of the normal battle courses because of time constraints. Coin Runners was also removed, with Balloon Battle being the only battle mode present in the game.

There are various game modes for Mario Kart 8. All the modes available on single player (some also on local and online multiplayer) are listed here.

Mario Kart 8's Grand Prix works similar to past installments. Like past games the 50cc, 100cc, and 150cc engine classes are available by default and completing 150cc unlocks Mirror; for the former three, however, Grand Prix rankings carry over to the lower engine classes after being completed on a higher engine class. In addition, and for the first time in the series, a 200cc engine class has been added as of the version 4.0 update, which is available by default alongside Mirror as of version 4.1. Players choose a cup, which takes them through four consecutive races of set order in that cup. Only the Mushroom and Shell Cups are available at the start of the game, with the others being unlocked after completing the cup before, and are available in every engine class after being unlocked. Players now have the option to do a multiplayer Grand Prix up to four players, unlike in most previous home console Mario Kart games, where only up to two players can race in Grand Prix.

Time Trial mode lets the player complete a selected course in the fastest time possible. Among the other features, in addition to viewing ghost data, players can upload their own ghost data onto Miiverse, which other players can download and comment on. In addition, beating one of Nintendo's Staff Ghosts in a race earns the player a stamp based on the course they raced on which they can use in Miiverse posts. Leaderboards as seen in Mario Kart Wii also return.

VS. Mode can be played locally with up to four players. Players can set rules like which items appear, the difficulty level of the CPUs, how many races, and Team or Solo racing. Players can also set how the courses appear, choose a course after one is finished, or play all tracks randomly or in order. In this game, Mirror Mode appears as a default engine class, even if it isn't unlocked in Grand Prix. The point system is the same as the Grand Prix.

Battle mode now features race tracks remixed to fit battle mode rather than containing all-new separate arenas. Balloon Battle can be played in teams or in free-for-all mode. It combines survival battle mode from Mario Kart DS and earlier installments and the timed points battle mode introduced in Mario Kart Wii; all players start with three points and three balloons each. Successfully making an opponent lose a balloon awards the player a point, and losing a balloon through any method will cause the player to lose a point. Balloons can never be regained (unless one is stolen from another player with a Mushroom or a Super Star), and if all balloons are lost, points can no longer be lost or gained. Defeated players can still drive and attack players as a Ghost, although they cannot receive points. Players can also now adjust the time limit from one to five minutes, and they can set up to 32 rounds in set intervals.

As with Mario Kart Wii, one or two local players can play over the Internet against other remote players. Players can race and battle with up to eleven other players from around the world or in their region, and can join and race with friends from the Friends menu. Finally, players are able to join a worldwide room using custom rules. Players can also set up their own rooms for friends and can race with custom rules, such as engine class, whether items are on or off, vehicle types available, control method, whether to play with computer players or not. As of version 3.0, players can also toggle whether they want to play on just the original 32 courses, the original courses and one of the two sets of DLC courses, or every available course by pressing after selecting Worldwide or Regional,[14] as well as when setting up a room for friends. When playing online worldwide or regional, players once again earn VR points based upon their ranking at the end of a race or battle like in Mario Kart Wii and Mario Kart 7; like in Mario Kart 7 a player's VR starts at 1000, though like Mario Kart Wii players have different VR rankings for races and battles.

Players can also create their own tournaments, similar to the communities from Mario Kart 7. When creating a tournament, players can choose an icon and a name for their tournament as well as set the rules, including engine class, whether to play in teams or not, whether to have items or not, vehicle types, whether there are computer players or not, and, as of version 3.0, available courses (the original 32 courses, every course including DLC courses, just the DLC courses, or, as of version 4.0, the original courses and one of the DLC packs). Players can also set times in which the tournament is available (weekly, daily, or between a fixed period and at what day and time the tournament begins and ends), the number of races before scores are totaled, and whether the groups shuffle after every four matches or not. Finally, the availability can be set, including whether it is open or a code is required or it is open to anybody, whether it is open to anyone worldwide or just regional, and whether only players of certain ratings can play. When looking for a tournament, players can enter a code, search by type, or look at active tournaments. In addition, playing in a tournament that allows the DLC tracks to be selected requires purchasing the DLC before the player can enter.

After entering a room, players can choose one of three predetermined tracks or "Random," which chooses one of any of the game's tracks at random if the player's option is ultimately chosen; when playing with friends, however, players can select from any of the tracks available depending on the settings. Once every player has selected a track, a roulette selects one of these options as the track to be raced on.

Mario Kart TV is an Internet-based feature in which players can view and share highlights of their and others' race and battle highlights. In the Mario Kart TV menu, the game automatically saves the twelve most recent race and battle replays, and the player can favorite up to six at one time. Players can view and edit theirs and others' replays by changing the duration of the replay and the focus characters and actions and can slow down, speed up, and rewind the replay while watching. Players can also share their highlights on Miiverse and YouTube; up to 60 seconds of video can be uploaded at one time, however.

There are 30 playable characters in the game, with 16 characters are available at the start while 14 are unlockable. There are also different classes that each character is in. Unlike the previous installments, random characters will be unlocked when players win cups, except the Mii which is always the eighth character unlocked. In addition, six more characters were added as part of DLC.

As in all the Mario Kart games, Mario Kart 8 keeps the use of items during the races. Four new items have been added to the list, being the Boomerang Flower, the Piranha Plant, the Super Horn, and the Crazy Eight. Coins continue to be used, carrying over from Mario Kart 7 (Rupees on the Hyrule Circuit; Bells on the Animal Crossing track).

Mario Kart 8 also features changes to the item box algorithm. Each item's probability of being obtained depends on probability distributions that are chosen based mainly on the distance from the driver in 1st position[8]. This means that you can get a Bullet Bill in second place if the leader has a significant headway. While the past Mario Kart games allowed the users to gain a different item from the Item Boxes while dragging some other such as a Green Shell or a Banana, in Mario Kart 8, players are restricted to carry only the item they are currently holding or dragging. Releasing the item in use will then allow the player to collect another item. In order to keep gameplay balanced, some items are much less frequent to appear, most notably Lightning and the Spiny Shell. Additionally, the Triple Bananas, the Triple Mushrooms and the eight items of the Crazy Eight surround the vehicle in the same manner as triple shells do, and opponents receive their effects when touching them, giving some disadvantage, or advantage in the case of the Triple Mushrooms and the Star. Racers do not lose their items if they fall from the track. The item icon, located on the top left of the screen, now displays a usage-remaining meter, either time remaining to use or uses remaining, for items with limited repeating usage.

Items found on the track

Items found in an Item Box 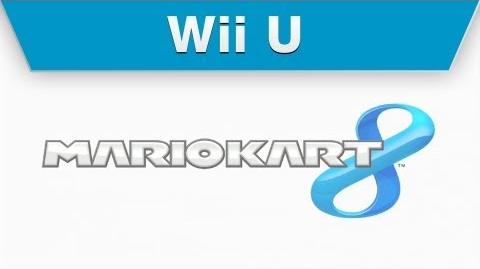 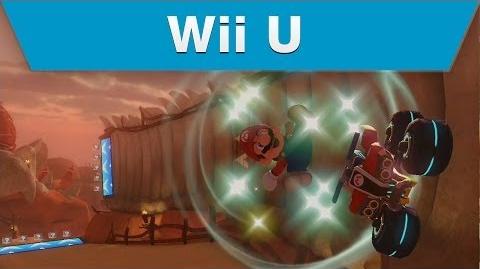 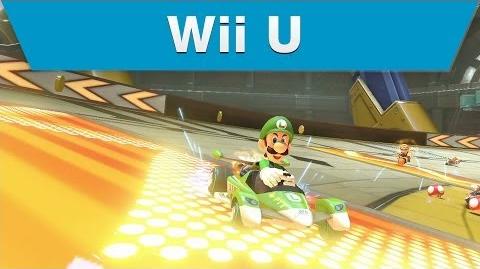 Retrieved from "https://mario.fandom.com/wiki/Mario_Kart_8?oldid=323791"
Community content is available under CC-BY-SA unless otherwise noted.