Mario Kart 64 (Japanese: マリオカート64 Mariokāto 64) (マリオカー 64 Mario Kāto Rokujūyon) often abbreviated as MK64, is the second installment in the Mario Kart series, being the first in the series to use 3D graphics. It was released in 1996 for the Nintendo 64, and later in 2007 for the Virtual Console. Mario Kart 64 features many changes from the previous game, such as new characters and items.

To drive, the player must steer with the joy stick, holding the

is used for breaking, and can also be used to drive in reverse. Item use is controlled by the Z button. The R button is used to jump, which can allow the kart to turn tight corners. If the player turns too much or too quickly, of if they turn side to side, it will result in the player sliding and spinning out of control, which makes the kart stop for a few seconds.

Instead of the five laps which we seen in Super Mario Kart, the races are now three laps, due to longer courses. As well as shortened races, the terrain of the race track is no longer flat, but features different types of terrain. Carried over from Super Mario Kart are the Item Boxes. Spinning in a style similar to a game of roulette.

There are four cups to race in, the Mushroom Cup, Flower Cup, Star Cup, and Special Cup. The cups are then divided into three engine classes which the player picks from when choosing the mode. The Engine Classes are 50cc, 100cc, and 150cc. There is an unlockable mode called Mirror Mode, which allows the player to race on mirrored versions of the courses increasing the level's difficulty. In order to unlock Mirror Mode, the player must complete all of the cups in the engine class 150cc. The player will know when they have an extra mode when the titled screen changes. There is also a Time Trials mode and a Battle Mode, which allows the player to race in different scenarios that don't require racing.

In the Time Trial mode, the player races against their own past times, which are represented by a ghost of themselves.

In battle mode, the players start with three balloons, which represent life. When a player gets hit by an item, or a heavy weight character runs into them, they lose a balloon. When one player has lost all of their balloons, they turn into a bomb, when all players but one turn into a bomb, the remaining player wins. 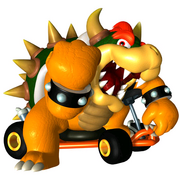