MarioWiki
Register
Don't have an account?
Sign In
Advertisement
in: Featured articles, Locations, Locations in Paper Mario: The Thousand-Year Door,
and 7 more
English

Mario Bros. House, also known as Mario's House, Mario's Pad and the Pipehouse, is Mario and Luigi's house, promptly named after the lead brother, with a large sign that displays "Mario" on the front. It's a reoccurring location throughout the series.

Mario's House is first seen in this game where Mario charges from his house after Princess Toadstool has been captured by Bowser again. After Mario is sent flying from Bowser's Keep by Exor's impact, Mario lands inside his home. Toad, waiting outside, then rushes in to tell Mario to hurry toward the Mushroom Kingdom. Mario's House can often be visited where Mario can fully heal himself and his party for free by turning off the mushroom-shaped lamp. During the 3 Musty Fears' sidequest, Mario can find a flag under his bed.

In every game of the Paper Mario series (except for Paper Mario: Sticker Star) the opening scene begins on this location, where both brothers are occupying at the time. The pad is only truly accessible in the first game, while in the others it is merely shown. The pad itself consists of three rooms: a dining area of some sort, a bedroom, and a secret room that contains Luigi's diary. The dining area consists of a stove, a table, a shelf displaying red and green mugs, and a chalkboard the display's Mario's records in the game. The bedroom consists of a bunk bed (with red and green blankets) and a mailbox. Here, Mario can sleep to regain health, of check mail sent to him throughout the duration of the game. The entrance to the secret room is an uncanny floorboard in the bedroom that can be accessed via a Tornado jump. When in the room, Mario can read entries of Luigi's secret diary, with new entries after each chapter. Outside of the pare various bushes, a tree, and a mailbox in which is the trigger to each adventure in the Paper Mario games. Other than the bed, the functions of the pad are merely for entertainment purposes only.

Mario's House also appeared in Mario & Luigi: Superstar Saga where a Toad is trying to alert to Mario and Luigi that "Princess Peach" was in trouble. However, Luigi was busy hanging clothes outside so the Toad headed inside to find Mario instead. The Toad ended up entering the shower while Mario is still inside and ran out and slammed into the wall and knocked himself out. Mario then rushed out to see the trouble. This is also the only time that Mario's Pad appeared in a Mario & Luigi game so far.

In the remake, Mario's House has some accessories referencing spinoffs such as Mario's Builder Outfit from Super Mario Maker, a Wii Wheel and a Gold Trophy both from the Mario Kart series, a red Tennis racket from the Mario Tennis series, a few photos depicting Princess Peach, a Shroob invasion, and several others. The house even has a robe as well as a desk with workshop tools. 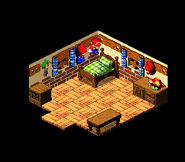 Inside Mario's pad in Super Mario RPG: Legend of the Seven Stars

Outside Mario's pad in Paper Mario

Inside Mario's pad in Paper Mario

Inside Mario's pad in Paper Mario: The Thousand-Year Door

The inside/outside of Mario's Bros.' House in Mario and Luigi: Superstar Saga.