MarioWiki
Register
Don't have an account?
Sign In
Advertisement
in: Games, Pages with section stubs, 2016 games,
and 6 more
English

Mario & Luigi: Paper Jam is a crossover game between the Mario & Luigi series and the Paper Mario series. It was released in Japan, Europe, and Australia in December 2015, North America on January 22, 2016, and in Korea on May 26, 2016.

The story begins when Luigi accidentally knocks over a book found deep in Peach's Castle while attempting to fix a hole in the roof. This book happened to be holding the Paper Mario world within.

This ultimately releases the paper characters into the Mario & Luigi world, spreading across the Mushroom Kingdom. Bowser and Paper Bowser, despite some disagreements between one another, decide to team up, combine their armies and kidnap their respective Princess Peach.

After the crew make it to Bowser's castle, the bridge gets cut off. Then Mario, Luigi and Paper Mario get sent to the Twinsy Tropics Dungeon.

After returning to Peach's Castle, they realise that the princesses have been taken to the summit of Mount Brrr. When they make it there, the both Kameks take them back to Bowser's Castle.

When the crew makes it to the top of Bowser's Castle they realise the princesses have already escaped, but then both Bowser Juniors interrupt and battle Mario, Luigi and Paper Mario.

After the battle both Bowsers show up and transform the castle into Neo Bowser Castle. Then Mario and others return to Peach's Castle, where their next mission is to head to the summit of Mount Brr, where the castle is.

While these are not really characters, they are giant paper robots built by Toadette for the main characters use.

Bros. Attacks return with their system similar to Superstar Saga and Dream Team. 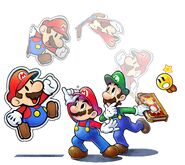