It is the fourth installment in the Mario & Luigi series. It was released in North America on August 11, 2013.

The gameplay shifts between Luigi's dream world, where Mario and Luigi move in a 2-D fashion, and the regular world, where they freely roam the overworld, unlike the previous three titles. While Mario is inside Luigi's dreams, Starlow can move Luigi's face to affect the area, such as spinning platforms. The battles give the player coins directly from enemies in battle, like Paper Mario: Sticker Star. Badges similar to those in Mario & Luigi: Bowser's Inside Story return in this game. Sometimes Gifts may also appear in between or after battles. Giant battles from Mario & Luigi's Bowser Inside Story return, only this time with Luigi being the giant instead of Bowser. The game's art style has also changed in this installment. Unlike the previous games' basic sprite look, this entry uses a pre-rendered look that makes the sprites integrate smoothly with backgrounds.

There is also a Hard mode that is unlocked after completing the game. In this mode, the player can't start again after losing a battle and must instead go back to the title screen and continue from where they last saved. They can also only carry 10 of each item. The enemies are also tougher.

A new feature during battles is if the player fails at Bro. moves a numerous amount of times, a slow-motion feature will activate allowing for easier hits. The game also has an added hint option which appears in battle if the player is struggling with an enemy; if chosen this gives information on the enemies' weaknesses and attacks.

The battle style is partially the same except for the dream world battles. Instead of fighting alongside Mario, Dreamy Luigi fuses himself into Mario, powering up his jump and hammer attacks. Whenever Mario jumps on an enemy, a bunch of Luigi clones will then follow in the attack damaging most of the enemies on screen. For the hammer, when Mario attacks, he slams the ground and the Luigi clones appear as well damaging all the enemies on the field. First Strikes also return with their purpose still the same. Also, Mario can run from enemy fights without losing Coins.

The Attack pieces from the previous game also come back, with the same 10 pieces to make an attack, varying from Mario and co. picking from block to block to other events such as an NPC giving 1 to 10 pieces by free will. But this time, Mario and Luigi have both their own list of attacks, although they are the same if one has an attack the other doesn't, only he can use it until the other gains it as well.

Inside Luigi's dreams, the attacks are called "Luiginary" attacks (a mix of "Luigi" with "imaginary") which involves many absurd ways of Mario using a whole crowd of Luigis, but spend Bros points equally.

The bottom screen of the 3DS displays the area map; unlike previous installments, the map shows and follows the actual location of the Bros.

Another new feature is the ability to save at any time and anywhere during the course of the game, though the player can still use Save Blocks if necessary they want to.

Arriving in the Pi'illo Kingdom

One day at the Mushroom Kingdom, Mario, Luigi, Princess Peach, and Toadsworth are given a message from Broggy from Dr. Snoozemore inviting them to Pi'illo Island of the Pi'illo Kingdom. Peach gladLy accepts the invitation and the rest all head out on a zeppelin for Pi'illo Island. However, it is soon attacked by strange, shadow creature (Antasma) which Mario defeats it in battle. The zeppelin suddenly makes a crash landing for Pi'illo Island but it turns that Luigi was dreaming the whole thing. Mario, Luigi, Peach, and Toadsworth then arrive at Pi'illo Island where they are greeted by Broque Monsieur. Unfortunately, Luigi is knocked unconscious when he falls off the zeplin. The Mario Bros. caatch up to Peach, Toadsworth and Broque Monsieur while learning about the fundimentals of the game. Broque invites the guests to play a game as part of the welcoming festivities. They must answer two true or false questions and will be rewarded with coins, with no penalty of failure. Once they reach Pi'illo Castle Luigi arrives, and the Mario Bros. will play another game to multiply their current coins.

At Pi'illo Castle, Mario, Luigi, and Princess Peach meet up with Starlow again where Starlow says that she was invited to Pi'illo Castle to represent the Star Sprites. Broque tells everyone to meet him at the north bottom floor of the castle when they are ready. Mario & Luigi could purchase items from the shops in the east, and talk to workers in the room to the west. After informing Broque that they are ready, Mario and Co. follow him. Broque leads them to a room with a projector screen, where Dr. Snoozemore teaches them more about the island lore. It is discovered that there was an ancient civilisation, called the Pi'illo Folk, who dissapeared. After the presentation ended, Peach stepped onto a platform with Toadsworth which blasted them off to underneath the castle. Immediately, Mario & Luigi jumped into action. Once the rocket platform returned, they used it to follow Peach and Toadsworth. After being flung off it they are greeted by Poltergeist who attempts to scare them off. Not worried by the threats, Mario and his brother continue. After solving many puzzles and fighting many enemies Mario & Luigi find Peach and Toasdworth. Near them is a strage stone rock. After getting it (and getting their first set of badges) four Poltergeists appear and do battle with the Mario Bros. After vanquishing them, Mario and Luigi clears the areas ahead to allow Peach and Toadsworth to return to the castle.

Mario on top of a large crowd of Luiginoids forming the Luiginary Stack.

Mario and many Luigis jumping on top of a group of enemies.

Luigi jumping out of a Luiginary Work.

Mario jumping into Luigi's dream, with Starlow watching nearby.

Mario in an area of Luigi's dream, with an Attack Piece Block nearby.

Japanese logo.
Add a photo to this gallery
i at  the level  with big massif 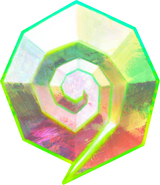 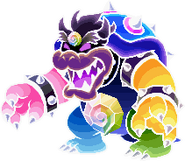 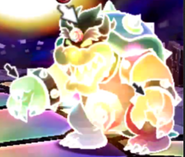 Add a photo to this gallery
Retrieved from "https://mario.fandom.com/wiki/Mario_%26_Luigi:_Dream_Team?oldid=273025"
Community content is available under CC-BY-SA unless otherwise noted.