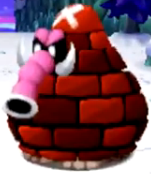 The Mammoshka is encountered as the last trial that must be faced. He is first encountered while he was sleeping in his lair. Big Massif and Lil' Massif managed to sneak past him but Mario and Luigi aren't so lucky as Luigi accidentally woke the monster up with his sneezing.

The Mammoshka is a large, mammoth creature that is mainly red in color. He has a crack on his forehead. In the Battle Ring, he is blue instead.

The Mammoshka's weakness is it's head, due to the legend, so using Jump-based Bros. Attacks is recommended. It should be noted that when the three Block Monolifts appear on the field, two of them will have a spike helmet and one of them a cracked-shell helmet, or a Buzzy Beetle-like helmet. Both Mario and Luigi should focus taking out the Block Monolifts (especially the ones with spike helmets) before attacking the Mammoshka. Once the Mammoshka has been weakened, it will shrink down to a smaller, blue form which Mario and Luigi must jump on in order to finish it off.

Retrieved from "https://mario.fandom.com/wiki/Mammoshka?oldid=265472"
Community content is available under CC-BY-SA unless otherwise noted.