She first appeared in Paper Mario. She was one of the 7 star spirits that Mario had to save. Like the other star spirits, she was trapped and turned into a card. She was held prisoner by Tutankoopa in Dry Dry Ruins. Her ability was lullaby, which, if it worked, would put enemies to sleep. Her ability cost 2 SP. 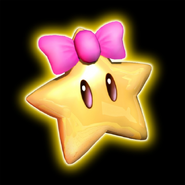 Mamar as she appears in Mario Party 5.