Mace Guys are regular enemies that appear in various games.

Mace Guys look completely identical to Shy Guys, except for the mace they carry with them. Some Mace Guys have larger weapons than the others.

The Mace Guys appear are relatively uncommon enemies, appearing only in three levels. They swing their weapon at Mario (Baby Mario) and Yoshi, attempting to damage them.

As the game is a reissue of Super Mario World 2, Mace Guys appear in the same levels as they did in the original. However, they also appear in a secret level as well.

Mace Guys appear as uncommon enemies throughout the game.

Mace Guy appears in Super Smash Bros. Ultimate as a sticker which increases the POW of a fighter's weapon by 22 when equipped.

One of Mace Guy's sprites 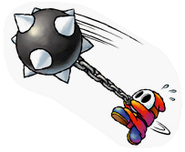 The Sticker of the Mace guy from Super Smash Bros. Ultimate

Official art of the Mace Guy as is appeared in Yoshi's Topsy Turvy
Dansk Deutsch Norsk
Community content is available under CC-BY-SA unless otherwise noted.
Advertisement