Lunge Fish are large fish that appear in the Yoshi series. Their main attack involves trying to lunge at Yoshi and eat him. These fish are indestructible and can only be avoided. You can toss an egg at the Lunge Fish to temporarily stun it and once you do, the best option would be to get away from it and don't fall into its open mouth by accident. In the level Up the Creek of Yoshi's Island DS, the third section of the river is infested with Lunge Fish and one is actually following your raft. If you fall off the raft and into the water, you will more than likely be eaten. Back before Super Mario World 2: Yoshi's Island. was released, Lunge Fish were originally green and white. 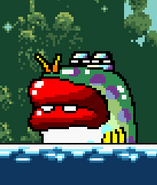 Add a photo to this gallery
Retrieved from "https://mario.fandom.com/wiki/Lunge_Fish?oldid=271406"
Community content is available under CC-BY-SA unless otherwise noted.