For the location with the same name, see Luigi's Mansion (location).

Luigi's Mansion (Japanese: ルイージの邸宅 Ruīji no teitaku) (ルイージマンション Ruīji Manshon, Luigi Mansion) is the second game to have Luigi star as the main character, and the first Mario game for the Nintendo GameCube. The game focuses on Luigi as he battles many ghosts in a haunted mansion to save Mario using the Poltergust 3000, a vacuum erected by Professor E. Gadd for sucking in ghosts. The first game to have Luigi as the main character is Mario is Missing!. A sequel called Luigi's Mansion: Dark Moon was released March 24, 2013, for the Nintendo 3DS. This game is also set to release on the Nintendo 3DS.

The story begins with Luigi winning a contest for a mansion. Mario goes to check out the mansion and tells Luigi he'll meet him there. As Mario goes to see the mansion, ghosts and King Boo ambush him and seal him inside a picture. After Mario doesn't come back, Luigi goes to check the mansion. He goes inside the mansion to see a hazy orange light with what looks like a key. It rises up and humorously bumps into the chandelier, dropping the key. It then escapes to a room up the stairs. Luigi picks up the key and unlocks the room, only to be ambushed by an orange ghost called a golden ghost which was the orange light he saw earlier. Suddenly, the ghost starts getting sucked in by something and Luigi turns to see Professor E. Gadd. The ghost drags him around the room and punches him to get away. They go back to his lab where the professor gives Luigi the Poltergust 3000 and tells him about what happened to Mario. After Luigi goes deeper into the mansion, he comes across a storage room where he presses a button that releases all of the Boos and King Boo himself. But King Boo sees Luigi carrying the Poltergust 3000 and he and all the other Boos run away. King Boo stays in a secret room for the rest of the game, up until the final boss fight, where he too was captured and turned into a painting.

These are the Portraits of all the portrait ghosts that can be captured throughout the game. The ghosts are separated by the Area in which they appear. At the bottom are the fifty boos that appear throughout the mansion.

In the European and Australian versions of Luigi's Mansion, notable changes can be found throughout the level. This has been done, due to players complaining that the Hidden Mansion has generally no differences in the Japanese and North American versions. The differences include:

This game has been met with generally positive reviews. IGN gave this game a 7/10 and GameSpot gave a 7.9/10. They were criticizing the game for its short gamespan and repetitiveness, but the game was praised for giving Luigi the starring role.

Luigi and his haunted mansion 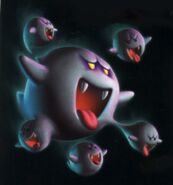 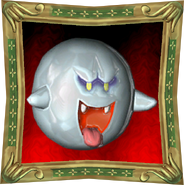 No eye Luigi at overall screen.
Add a photo to this gallery

The title screen for Luigi's Mansion.
Add a photo to this gallery 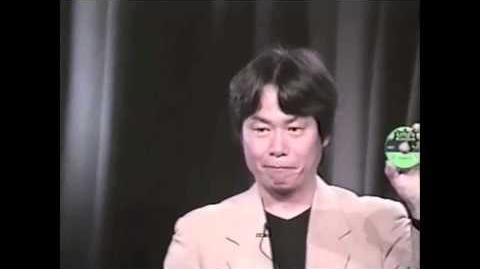 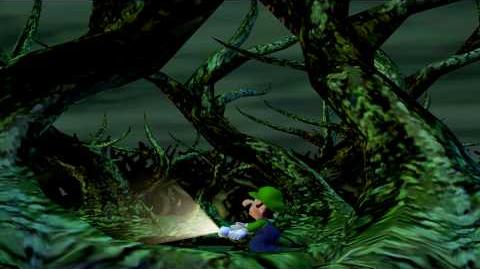 Retrieved from "https://mario.fandom.com/wiki/Luigi%27s_Mansion_(video_game)?oldid=261471"
Community content is available under CC-BY-SA unless otherwise noted.