This course's missions are 1-6 and 2-4, both having Luigi as the playable character. In 1-6, Luigi has to drive out of the mansion reversed. In 2-4, he has to destroy all five Item Boxes to reveal mushrooms.

While a small part of the track goes through the mansion, most of the track actually takes place on the mansion grounds. Three 90 degree turns inside the mansion and various winding curves outside create plenty of opportunities to drifting, and the only straight away on the track is too narrow to allow for easy snaking. The paintings appear on the wall and watch closely as a small spider drops from the machine onto Luigi's hand. The outside track is green and is in a graveyard. In addition, a section of the outside track features mud, which reduces traction and makes it difficult to steer or change direction quickly. Walking trees serve as obstacles on some parts of the track whom try to get in racers' way. The course's Staff Ghost uses Luigi in the Streamliner.

This course reappears in Mario Kart 7. Instead of there being Portrait Ghosts on the wall in this game, Boo portraits replace them and try to pop out of the painting while racers pass. There is a ramp that also allows racers to use their gliders. The gate entering to Boo Woods is also broken, revealing a shortcut. 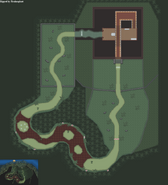 The map of the course.
Add a photo to this gallery
Retrieved from "https://mario.fandom.com/wiki/Luigi%27s_Mansion_(track)?oldid=313227"
Community content is available under CC-BY-SA unless otherwise noted.