View source
watch 01:54
Arcane: League of Legends - The Loop
Do you like this video?
Play Sound

In these games, Luigi usually must use his flashlight to stun ghosts then suck them up. Most times, ghosts tend to drop items to halt the green hero's process. Also, whenever Luigi sucks up all the ghosts in one room, the room lights up and a treasure chest usually appears.

However, gameplay is much different in Luigi's Mansion: Dark Moon as, usually, rooms are already lit up when Luigi first enters but gets darken whenever a ghost appears. Also, the door gets locked and Luigi has no choice but to fight the ghosts. Also, Luigi explores five different mansions, which all are separated into different missions. Now, Luigi must use the Strobulb to stun ghosts and the Dark-Light Device to stun Boos. It should also be noted that Luigi can use Golden Bones to revive himself whenever he loses all of his hearts.

Luigi's Mansion 3 has gameplay similar to its predecessor, but much more complex and updated. The most notable change is the addition of Gooigi, a green-ish version of Luigi that has all the same actions as him. Gooigi is different though, in the fact that he only has 25 HP, he regenerates HP naturally, can squeeze through gaps, and instantly dies when in contact with water or fire. If he dies or is recalled, he can instantly be summoned again. Apart from Gooigi, Luigi's Standard kit is much wider. He still has the abilities of vacuuming, blowing, and flashing with the strobulb. The Dark-Light device now has unlimited time before it overheats. In addition to the standard options, he also has the ability to "Burst", replaces power surging with "Slamming", is able to fire "Suction Shots. With the exception of 1F and 2F, Luigi must travel through individual floors and defeat Boss Ghosts to collect elevator buttons and proceed to the next floor to eventually battle King Boo and rescue his friends. 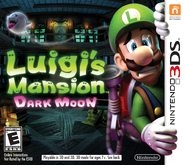