Level Up, or at most times Level Up!, is a common term used mainly in Mario RPGs where a character has enough Experience Points (or Star Points in the Paper Mario games) to reach the next level. This term is first seen in Super Mario RPG: Legend of the Seven Stars.

Leveling up is special in this game. Whenever Mario, Mallow, Geno, Bowser, or Princess Toadstool reach a certain level, they can learn a new move. In this game, whenever someone levels up, a special screen is shown with the character emerging from a warp pipe doing their victory pose. The player then has the choice to increase either the HP, the Attack, or the Special (Magic attack and magic defense).

Paper Mario introduces Star Points instead of Experience Points. Whenever Mario reaches 100 Star Points, he will level up. The player has the choice to increase either the HP, the Flower Points, or the Badge Points. Also, every time Mario levels up, his HP, FP, and the Star Gauge are fully restored. This method is continued into Paper Mario: The Thousand Year Door. In Super Paper Mario, Mario can only level up by reaching a certain amount of points. Due to the lack of Experience Points, leveling up isn't possible in Paper Mario: Sticker Star, although, he can increase his HP by finding Hp-Up Hearts in certain levels.

Leveling up in the Mario & Luigi games is similar to Super Mario RPG: Legend of the Seven Stars. Whenever Mario or Luigi (or even both at the same time) level up, they are taken to a special screen and the player has the choice to increase either the HP, Bros. Points, Attack, Defense, Speed, or Stache by points that are spun on a wheel. This method has remained the same throughout the series. Also, Mario or Luigi's rank may increase after reaching a certain level. 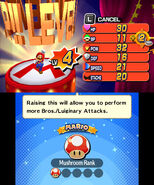