MarioWiki
Register
Don't have an account?
Sign In
Advertisement
in: Objects, Hazards, Traps and Obstacles,
and 16 more

Lava Plumes (also called Vents, Fire Plumes, Lava Eruptions, Lava Pillars, Lava Fountains, or Lava Geysers) are eruptions of lava that occur periodically from lava and fiery pits. They usually appear in between gaps that Mario and friends are required to jump across. They are similar to Waterspouts and Sand Geysers with the biggest difference being they cannot be safely walked across and will burn those who touch them. In all games they appear in, Lava Plumes cannot be destroyed or dissipated, the heroes need to either wait for the Lava Plume eruption to die down before continuing or jump over the Lava Plume to avoid the inferno.

Lava Plumes appear in Super Princess Peach, in this game, they are found in various levels of Fury Volcano erupting from the cracked floorings periodically. Touching a Lava Plume will cause damage. Peach can make use of the Lava Plumes by picking up a Tiki Platform and placing it on the Lava Plume which can then be stood on to reach higher ledges.

Lava Plumes return in Super Mario Galaxy appearing in the Melty Molten Galaxy and Bowser's Galaxy Reactor. In this game, they are an outright hazard and will burn you if you touch them. They erupt from lava in areas around the lava ocean or in between platforms which require a jump.

Lava Plumes reappear in Super Mario Galaxy 2 retaining their role from the previous game, they can once again scorch Mario (or Luigi) on contact and require timing or maneuvers to get around. They are seen in Bowser's Lava Lair the Shiverburn Galaxy, the Melty Monster Galaxy, and Bowser's Galaxy Generator.

Lava Plumes are seen again in Super Mario 3D Land. In this game, they are seen erupting from the lava around various Castle levels elevating platforms allowing Mario (or Luigi) to jump on them to reach higher ledges, in some levels such as World 8-6 and World 8-Bowser's Castle, Lava Plumes are an outright hazard and must be avoided at all costs. Lava Plumes can also be seen around the lakes of fire outside the level as well.

Lava Plumes return in Super Mario 3D World and Super Mario 3D World + Bowser's Fury once again acting as they did in previous games, they appear in various lava-themed levels such as Bowser's Lava Lake Keep. Lava Plumes also appear during the boss fight with Bowser and his Bowser Mobile erupting from the lava below through the mesh parts of the roads. The Lava Plumes eruptions is also easier to time in this game than in previous games.

Lava Plumes appear in Super Mario Odyssey commonly being found in the Luncheon Kingdom and the Moon Kingdom in the Underground Moon Caverns. In the Luncheon Kingdom, Pink Lava Plumes are seen all around the Kingdom around the boiling hot lakes, when Mario captures a Podoboo, he can safely touch a Lava Plume without being hurt. Mario can also ride Lava Plumes to reach higher platforms while having captured a Podoboo. In the Moon Kingdom, since there are no Podoboos, Lava Plumes are an outright hazard, when Mario captures a Parabones to fly across the fiery lakes, Lava Plumes will erupt from the lava at which point he must go around. If the Parabones touches a Lava Plume, it will disappear.

In the Mario Kart series, Lava Plumes have been a primary obstacle in many lava-themed courses (such as Bowser's Castle) starting with Mario Kart Wii. In each of the games they appear in, Lava Plumes will knock those who drive into them high into the air.

The Lava Plumes are also seen in a Knex Set based on the game involving Yoshi racing on a track dodging the Lava Plumes.

Lava Plumes return in Mario Kart 7 appearing in Bowser's Castle erupting from the lava by the ramps making jumping the ramps a rough gamble. Lava Plumes are also seen in Big Donut where they erupt from the Lava and spin out those who glide into them sending them plummeting into the lava below.

Lava Plumes appear again in Mario Kart 8 and Mario Kart 8 Deluxe where they appear in Bowser's Castle at the gliding point near the track's end. They are seen erupting from the Lava below and scorch any racers who glide into them sending them plummeting down below. Lava Plumes are also seen in the games' remake of Grumble Volcano erupting from the lava in the areas where the crumpled ground once was.

Lava Plumes are seen in Paper Mario: Sticker Star in the level Rumble Volcano. In this game, they are seen lifting the various platforms which are used to traverse the volcano. The Lava Plumes can elevate to any level allowing Mario to stop off on certain ledges to obtain items and more.

Lava Plumes appear in Mario vs. Donkey Kong. In this game, they commonly appear in earlier levels of Fire Mountain propelling platforms into the air allowing Mario to reach higher ground.

Lava Plumes appear again in Mario vs. Donkey Kong 2: March of the Minis in Lava Dome. In this game, they once again raise platforms into the air allowing Mini Marios to jump on them them to reach higher platforms which can be useful for reaching high ledges however touching the Plume itself will scorch a Mini Mario. In the Construction Zone, Lava Plumes and their Platforms can be placed in the Lava Dome Kit as well as Special Kit 2 and Special Kit 3. 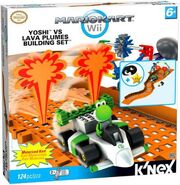 The Pink Lava Plumes from the Luncheon Kingdom in Super Mario Odyssey.