As their name suggests, these items are used to launch Mario across great distances through space. In order to use them, Mario must use his Star Spin while within their boundaries. They typically launch Mario at a speed of 100 metres (110 yards) per second (225 kilometres (144 miles) per hour)

There are different variants of Launch Stars. When Mario feeds a Hungry Luma, it will transform into either a planet or a galaxy and will leave behind a Pink Launch Star to get Mario there. After collecting the three Green Power Stars, Green Launch Stars will send Mario to the Trial Galaxies.

In the sequel, Super Mario Galaxy 2, Launch Stars act exactly the same as they did in the previous game. There is also a similar but weaker variant in both games, the Sling Star.

Launch Stars return as items in Super Smash Bros. Ultimate as throwing items (though they are renamed Super Launch Star). Their victim will be launched in the direction the user threw them. Unlike most throwing items, Launch Stars can affect their summoner. Before they are planeted, Launch Stars are small, but these items grow to their full size whenever you plant them. Rosalina also summons this item for her Up Special Move, where she launches out of it immediately. However, it sports a rainbow pattern as opposed to being orange like it was. 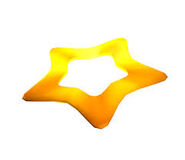 The similar, yet weaker, Sling Star

Names in other Languages