In the second half of the amusement park in the Super Nintendo Entertainment System, there are giant Kannon and Kruncha statues located in the park. There also appear to be marshes and bramble areas, showing that the amusement park was built on a place with marshes and brambly vines. There are also unsafe rollercoaster rides with many pitfalls, making visitors have to jump over the pitfalls to avoid losing a life. There are also Zinger hives located around here. 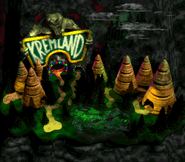 The first part of Krazy Kremland. 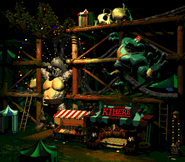 The second part of Krazy Kremland. 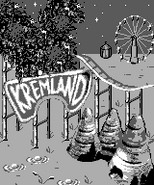 Krazy Kremland in the overworld in Donkey Kong Land 2.
Add a photo to this gallery
Retrieved from "https://mario.fandom.com/wiki/Krazy_Kremland?oldid=233565"
Community content is available under CC-BY-SA unless otherwise noted.