Koopa Troopas did not appear in Mario Bros., but enemies that are called Shellcreepers to resemble them. In all remakes, they are replaced by Spinies.

In Super Mario Bros., they were renamed "Koopa Troopa", and Koopa Paratroopas made their debut. They can be used as projectiles after they retreat into their shells. Green Koopas simply walked forwards, turning around if they encountered a wall or another enemy, and if they reached a ledge, would walk straight off, even into a bottomless pit. Red Koopas were mentioned in the manual as being more powerful than their green counterparts. In the game, this meant they had the sense not to walk off edges.

Super Mario World brought drastic changes to the Koopa Troopa. In this game, Koopa Troopas finally started walking on two legs and wearing shoes. Also, like in Mario Bros., stomping on Koopas ejects them from their shells rather than causing them to hide. An ejected Koopa will slide out of its shell, wearing only a t-shirt, and will crawl back to its shell after being temporarily stunned. Their shells can still be carried. The game also featured Blue and Yellow Koopas. A Koopa that reentered a yellow shell would flash and turns invincible against certain of Mario abilities, such as fireballs and normal jumps, and he will chase after Mario, sliding around inside the shell. The blue Koopa appears to be stronger than the other ones as he is ejected from his shell, and unlike the other Koopas, he doesn't enter again in his shell, but he grabs it and kicks it as Mario does instead. If Yoshi ate a Red, Blue, or Yellow shell, he would gain a different ability until he swallowed or spit the shell out. Eating a flashing shell gave all three abilities at the same time. When the player finds or completes all goals, a different shell will appear on Koopa Troopas. The game also introduces the Super Koopas, that use no shell and fly with a cape towards Mario. If a player stomps on a Super Koopa with a flashing cape, he gains a Cape Feather

In Super Mario 64, Koopa Troopas wear boxers after being knocked out. Their shells can be used as skateboards and can also be used to slide over lava. Koopa Troopas in this game appears in various sizes, as exemplified by Koopa the Quick.

The Paper Mario series introduces friendly Koopas that have their own towns, such as Kooper, Koops, etc. However, it also introduced some pretty evil Koopas, such as the Koopa Bros. and Tutankoopa. Other forms of Koopas, such as the Koopatrols and the giant Tubba Blubba. Others are Hammer Bros., Lakitu, etc. But, Koopas are nice sometimes. An example of such a Koopa is Koopa the Quick, first appearing in Super Mario 64, who races the player in Bob-omb Battlefield and Tiny-Huge Island. Generic Koopa Troopas have also appeared throughout the Mario Party series as NPCs. Like Toad, they are generally helpful towards the players, usually providing them with rewards or running mini-games.

Koopa Troopa reappears in Mario Power Tennis as a playable character, where he is classified as speedy. His Offensive Power Shot is the Water Bomb, where Koopa performs a special drop shot that forces the characters to get close to the net. His other special move, the Defensive Power Shot named Water Shell Dash, consists of saving the loose ball by hiding into his shell and homing into the ball to make the return. Paratroopa is also present in this game. Koopa Troopa's default partner is Yoshi.

Koopa Troopa's Mario Power Tennis trophy animation begins with him walking on stage with Luigi, Mario, and Peach congratulating him for his victory; Diddy Kong is also there, eating bananas. He then throws a banana peel in Koopa Troopa's path, unaware of where he is walking; and with Koopa Troopa not paying attention. Mario, Luigi, and Peach try to warn him, but he slips onto his shell and slides across the stage, ricochets off a pole and hits Luigi in the head, making him drop the trophy. Koopa Troopa then catches it.

In Super Paper Mario, green-shelled Koopas wearing shades are introduced rather than the red-shelled ones. It is also shown that the Koopa Troopas that are wearing the shades have been brainwashed into serving Count Bleck.

In New Super Mario Bros. they are basically the same as in Super Mario World, they walk on two legs, the wear shoes and can still be carried. Both green and red Koopa Troopas appear and have the same functions as in the other games. The Blue Koopa Shell appears as a power-up in the multiplayer Ice stage. They can also be used as flotation devices in water.

In Super Mario Galaxy, they are semi-common enemies found mostly on the airship levels. Strangely enough, they are shown walking on all fours, like in SMB and SMB3, and always show an angry-looking expression. They did not flee from Mario like in Super Mario 64 and instead patrolled a set area; which was a straight line for Green Koopa Troopas and a small circle for Red Koopa Troopas.

Also, unlike in Super Mario 64, Koopa Troopas can actually hurt Mario in this game. As usual, jumping on a Koopa will cause it to retreat into its shell, but they can be defeated permanently by attacking with a Ground Pound. Attacking with a spin will defeat the Koopa and also spin the shell into Mario's hands so it can be used. In some areas, upon defeating a Koopa, another Koopa will spawn in its place.

Koopa shells also appear as common items which can be thrown to defeat enemies and smash open chests or held onto underwater in order to swim faster; red shells travel faster than green shells and home in on enemies, while the green shell goes in a straight trajectory.

In Mario Party, Koopa stands at the beginning of each board and when players pass him he gives them money.

Koopa's role in both 2 & 3 is the owner of the Koopa Bank. When a player passes by the Bank, Koopa takes 5 coins from that player. If less than 5, Koopa would take all of the remaining coins. If a player lands on the Bank Space, Koopa would give all the coins of the bank to that player.

In Mario Party 3, Koopa is a partner in Duel Mode. He has low attacks, low defense and low salary.

In Mario Party 4, Koopa became the host of the show alongside Toad, Goomba, Shy Guy, and Boo.

In Mario Party 5, Koopa appears as a Bank owner and the star of the mini-game Flower Shower, where he got married to a female Koopa.

Koopa also had a board in Mario Party 8 that was named Koopa's Tycoon Town. There were Koopa bellhops standing in front of hotels, and asked the players to buy their hotel with coins. When a player landed on a lucky space, a Koopa Driver appeared, and took the player to the lucky road, where the player could collect coins and buy a 3-Star hotel for only 1 coin. Multiple Koopas also appeared on the Train and in crowds.

Koopa appears for the first time as a main playable character, selectable from the beginning of the game.

Koopa Troopas appear in Mario Party 10 as non-playable characters, appearing in the background of the mini-game Shy Guy Shuffle. 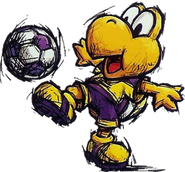 Mario Party 9
Add a photo to this gallery

Super Mario Bros.
Add a photo to this gallery

Retrieved from "https://mario.fandom.com/wiki/Koopa_Troopa?oldid=237384"
Community content is available under CC-BY-SA unless otherwise noted.