Koopa Paratroopa (frequently abbreviated to Paratroopa) is a recurring common enemy in Nintendo's Super Mario video game franchise. He is a Koopa Troopa with wings on it. However, they will fail to retain them if someone decides to jump on them. He appears also appears as a playable character in Mario Kart: Double Dash!! and Mario Power Tennis for the Nintendo GameCube. In these installments, the red Paratroopas are the default color, having appeared first, and the green Paratroopas are the alternate color, having appeared later. Their name comes from "paratrooper," a term used in the military to describe soldiers who parachute down to attack.

In the Super Mario series

Paratroopas first appear in this game, first appearing in World 1-3. Red ones fly up and down, while green ones jump around. They can be defeated by shooting a fireball at them. Stomping on a Paratroopa will turn it into a standard Koopa Troopa. Due to a possible programming oversight, red Koopa Paratroopas that lose their wings will walk off ledges as if they are green Koopa Troopas.

Paratroopas return in Super Mario Bros.: The Lost Levels. In this game, they act the same as they do in its predecessor. They are more common in this game, and in some levels even more common than Koopa Troopas or Goombas. and are found frequently during several platforming sections but can be defeated in the same ways. Just as before, the green ones hop around while the red ones float around. In these instances, however, green Koopa Paratroopas are recolored gray due to palette limitations (they are colored normally in Super Mario All-Stars; similarly, the gray Cheep Cheeps are now colored green). In this game, red Koopa Paratroopas first appear in World 1-3, while green Koopa Paratroopas first appear in World 1-1, being one of the first enemies encountered. World 7-3 is the only level in the original game where green Paratroopas actually fly, while all other green Paratroopas simply hop. Some levels require the player to jump off Koopa Paratroopas in midair in order to cross large voids that cannot be done within the player's jumping range, even with a long jump.

Paratroopas also appear in Super Mario Bros. 3 in this game, they act the same as in its predecessors. The Green Paratroopas hop around while the red ones float around. This time, the use of the Super Leaf as well as the Hammer Suit can easily defeat a Paratroopa. In Giant Land, larger versions of the Paratroopa called the Colossal Paratroopa can also be found (only in green forms). They hop around but they're no stronger than a basic Paratroopa and can be defeated in the same ways. Stomping on a Colossal Paratroopa will turn it into a Gargantua Koopa Troopa.

In Super Mario World, Paratroopas return and act the same as in its predecessors, but they get an extremely new design. Instead of walking like turtles, they use their feet. The Green Paratroopas hop around while the Red Paratroopas float left, right, up, and down. Any attack including the use of the Cape Feather can defeat them. Unlike before, stomping on a Paratroopa defeats it instantly rather than knocking loose it's wings.

In Super Princess Peach, Paratroopas and Red Paratroopas appear as common enemies. Like the original Super Mario Bros., their differences are consistent. They green ones hop around while the red ones float around. Any attack can beat either Paratroopa. There are also colorful varities of Paratroopas the Mad G. P-Troopa and the G. R. P-Troopa.

Paratroopas make their first-ever appearance on a New Super Mario Bros. game in New Super Mario Bros.. They are more common, but unlike in Super Mario World, whenever Mario jumps on a Koopa Paratroopa, it simply loses its wings, instead of being defeated instantly, but a ground pound will immediately send it spinning in it's shell at an alarmingly fast pace. In this game, both varities of Paratroopa can either hop or float regardless of it's shell color. Unlike Koopa Troopas, they do not move to the music. Koopa Paratroopas are first encountered in World 1-4.

Paratroopas are back in New Super Mario Bros. 2 where they act like they did in other games. Both Red and Green Paratroopas appear and just as before, either color can either float or hop. Once again, Fireballs and ground pounds can defeat them and stomping on one turns it into a standard Koopa Troopa. The use of Raccoon Mario will flip it upside down in it's shell and the use of Gold Mario can destroy one easily for bonus coins. When a Gold Ring is activated, the Paratroopas are among the enemies that become Golden. They can be stomped on for bonus coins and when their shell is tossed, it leaves a trail of coins in it's wake. Gold Paratroopas can either hop around or float around as well. As in most sidescrolling platformers, they make their first appearance in the first athletic level of the game, being World 1-3.

Paratroopas also appear in New Super Mario Bros. U, New Super Luigi U, and New Super Mario Bros. U Deluxe where they act like they do in other games. In these games, they aren't as frequent as in the earlier games. Once again, Paratroopas can be frozen with iceballs and defeated with fireballs and ground pounds and can either hop or float in the air regardless of their shell color. They appear much later than they normally do, making their first appearance in World 2 of the game, Layer Cake Desert, in the first level, Stone-Eye Zone. In New Super Luigi U, they first appear much later in the game, in Soda Jungle's Dancing Blocks, Poison Swamp.

Paratroopas (under the name Para-Koopa in this game) appear in Super Mario World 2: Yoshi's Island and Yoshi's Island: Super Mario Advance 3. Like Super Mario Bros., the green ones hop while the red ones float. Para-Koopas make their debut in the level Visit Koopa And Para-Koopa. They are rather common in World 4 however, a Para-Koopa can be turned into a standard Koopa Troopa by stomping on it or tossing an egg at it, they can also be defeated instantly with a ground pound or fire breath. They can also be frozen with the effects of an Ice Melon.

Paratroopas (under the name Parakoopa) appear in Yoshi's Island DS as semi-common enemies, they first appear in Glide Guys Take to the Skies alongside the Koopa Troopas. Just as before, the differences are consistent as the green ones float while the red ones hop around. A Parakoopa can be defeated with a ground pound or Baby Bowser's fireballs and their wings can be knocked loose with a stomp or a egg toss. In the Museum, they can be found in the Land Exhibit.

Paratroopas return in Yoshi's New Island (the first game in the Yoshi series where they're under their traditional name). They behave the same as they did in the previous games only with a more modernized look. They once again are seen commonly in World 4 and can be defeated with ground pounds and once again, stomps and egg throws can knock loose their wings.

Paratroopa is a character in Mario Kart: Double Dash!!. His Special Item is three Red Shells or three Green Shell. He has a red shell instead of a green shell, and has wings. He is originally a partner of Koopa Troopa's, but you can mix him up with anybody else just as well. He didn't appear as a driveable character in any other Mario Kart game. Also, In the files of Mario Kart Wii, a Paratroopa icon was there, hinting he was going to be in the game.

However, several Koopa Paratroopas are visible as audience in Mario Kart 8/Mario Kart 8 Deluxe'' on the sidelines cheering the racers on.

Paratroopa has been a playable character in some games of the Mario Tennis series. Its first playable role was in the Nintendo 64 version of Mario Tennis. Here, Paratroopa is classified as a Tricky character, meaning that its shots have a high curve and spin to them to mess up opponents. However, Paratroopa serves from low reach, which means that it has trouble reaching balls. When Paratroopa loses, it loses its wings and becomes a normal Koopa Troopa. In the game's intro, Paratroopa participates in the tournament and loses to Luigi, allowing him to advance to a semi-finals match against Princess Peach.

Paratroopa is an unlockable character in the sequal Mario Power Tennis. He is unlocked after completing the tournament for the first time. For his offensive power shot, he engulfs the ball in a purple light and lobs it, causing the opponent to slow down temporarily if they hit it. For his defensive power shot, he jumps into the air and flies at the ball.

Koopa Paratroopas appear in Mario Tennis Aces in both playable and non-playable capacities. While they can appear as audience members on various stages, a red Koopa Paratroopa reappears as a playable character, available in the game's version 2.0.0 update, being unlocked by participating in the November 2018 online tournament, otherwise available for everyone after the end of this tournament. He returns as a Technical character, but notably has a strong curve on his slices. His sideways Trick Shot is Koopa Boost, which resembles his lunge from Mario Power Tennis, and his forward Trick Shot is Roll Call. His Special Shot, the Spiral Special, involves him and two other Paratroopas flying about and generating a tornado.

Before his official announcement as a playable character, Koopa Paratroopa's emblem had been seen on a bag available as a preorder bonus in Japan.

If you are in an area where there is a big gap that is too big to jump across, but a Paratroopa is flying above the gap, you can use the Paratroopa by hopping on it and bouncing off of it to get to the other side easier. You have to do this sometimes to beat the level. This can be especially handy for reaching higher ledges which contain secrets whilst needing to gain some extra height to reach it. 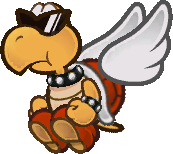 A Koopa Paratroopa in Paper Mario: The Thousand Year Door 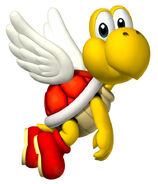 A red Partroopa flying on the sky

Koopa Paratroopas in the first series. 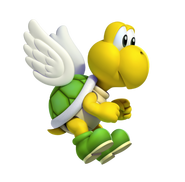 A Paratroopa from New Super Mario Bros. U