When Diddy and engage battle, the battle starts with Kleever rising from the lava and throwing three fireballs. After this, a kannonball appears. Diddy and Dixe must heave it Kleever to hurt him, making him shaking in a reddish-pinkish tint. Several hooks then form over the lava. Jumping onto each of these hooks to get to the other side reveals a kannonball on the other side. Diddy and Dixie must continue doing these steps until Kleever emerges into the lava.

Apparently, Kleever rises out of the lava instead of defeat. Kleever then forms a new tactic, turning himself ninety degrees while trying to stab Diddy and Dixie. Diddy and Dixie must dodge this attack, making hooks appear over the lava again. They must use the hooks to get to the other side, grab the kannonball and do this until Kleever is defeated, allowing access to Krem Quay.

In the Game Boy Advance remake of the game, Kerozene uses two smaller Kleevers to attack Diddy and Dixie. They only slice up and down while aiming at the monkeys. They, unlike Kleever, can be defeated with a single hit by a kannonball.

When Kleever is rematched, Kleever flies around, trying to stab Diddy and Dixie. Then, Kleever starts shooting out fireballs and then a barrel. Diddy or Dixie must then pounce onto the barrel to release a kannonball inside of it. They must then use this kannonball to attack Kleever. Then, Diddy or Dixie must use Krocheads to cross to the other side. They must repeat this step one more time.

Next, Kleever tilts and tries to stab Diddy and Dixie and then goes up in the air once the attack is avoided. Then, Diddy and Dixie must use a kannon to shoot a kannonball at Kleever. Then, the two must cross to the other side via Krocheads once again. They must do this again to obtain Kleever's Bonus Coin. 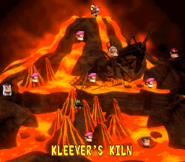 Kleever's Kiln in the overworld. 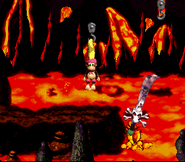 Dixie on a hook with Kleever behind her. 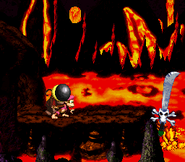 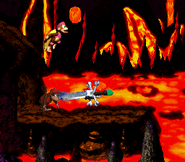 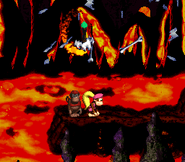 Retrieved from "https://mario.fandom.com/wiki/Kleever?oldid=233561"
Community content is available under CC-BY-SA unless otherwise noted.