Evil
Kamek (カメック Kamek?) is a Magikoopa who acts like a maternal figure to Bowser and who took care of Baby Bowser during the events of Super Mario World 2: Yoshi's Island, Mario & Luigi: Partners in Time, and Yoshi's Island DS. He apparently has a high rank in the Koopa Kingdom army (or Koopa Troop), since during this time he both raised Baby Bowser and took control of his army until he was old enough. Kamek also knocked Mario into space in Super Mario Galaxy. Kamek is fought as boss in the Yoshi's Island series and Mario Party DS. Kamek earned his name from the Japanese translation of Magikoopa. He and Kammy Koopa, another underling of Bowser, serving him in the Paper Mario series, are often confused with each other. He's also part of the Mario Kart Wii bike Magikruiser.

As Bowser's right-hand man and leader of the Magikoopas (possibly alongside Kammy Koopa) Kamek has immense (and perhaps unparalleled) magical powers, which he has demonstrated in several games. He can use his magic for a multitude of different effects, such as the usual magic bolt used by the Magikoopas, being capable of turning rubble into living enemies, damage his foes, etc. Amongst his most powerful feats of magic are the ability to change the landscape to make battles much more difficult for Mario and Co. and even alter the size of living beings, mostly enlarging foes to gigantic size, Bowser being perhaps most astonishing example to date, growing to such size that even lava was harmless, even though in previous games it defeated him. He can also use this ability to shrink his foes, but he mostly uses the former. He is capable of flight through his broom, and is capable of telportation. The fact that during New Super Mario Bros: Wii. he used his magic to aid the Koopalings, strongly implies he's much more powerful than them in magic, likewise he has no physical prowess whatsoever. His magic is powerful enough that during Super Mario Galaxy, one blast of magic, was sufficient to literally catapult Mario towards the edge of the universe (Comet Observatory).

Kamek was introduced as a capsule in Mario Party 5. When a character uses a Kamek capsule or lands on the space, Kamek will appear and shuffle all the players capsules, dividing them evenly among each of the players. The player that summons Kamek will always get a capsule, despite the number of capsules each character is carrying.

Kamek appears as an orb in Mario Party 6. In this game, Kamek will change an opponents character space into the space of the person that used his orb. Thus, giving the summoner the opponent's orb space.

Kamek reprises his role as an orb in Mario Party 7. In this game, Kamek's role as an orb is different. When a player lands on an opponent lands on a character space containing a Kamek orb, Kamek will appear and steal all the opponents orb, giving them to the space owner,

Kamek makes a significant role as a judge along with Toad (character) and Toadette.

Kamek became a playable character in the February 2019 Tournament DLC. 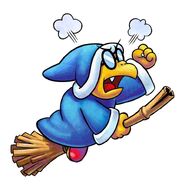 Mario Party: Island Tour
Add a photo to this gallery
K
Retrieved from "https://mario.fandom.com/wiki/Kamek?oldid=267492"
Community content is available under CC-BY-SA unless otherwise noted.