The Jetsetter, (also known as the Aero Glider) is a large kart in the game Mario Kart Wii.

The Jetsetter resembles a Le Mans Protoype racecar, with blue wheels, a fin located at the back, as well as a singluar dual exhaust port. It also has stripes and a windshield. The Jetsetter has a striking resemblance to Luigi's Streamliner from Mario Kart DS, as well as the Blue Seven in Mario Kart 7. The characters' emblem is located on the hood and the sides of the kart.

The Jetsetter is unlocked by achieving at least a 1-star rank in all the cups of the Retro Grand Prix on 150cc, or by playing 4,500 races.

[Rosalina]] uses Jetsetter in a Time Trial course for the Expert Staff Ghost for Rainbow Road by Nin★Syun1.

Its bike counterpart is the Spear. 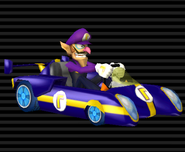 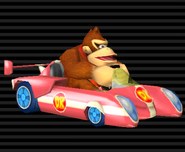 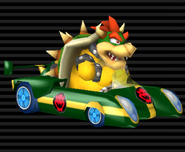 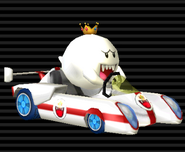 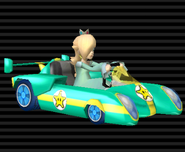 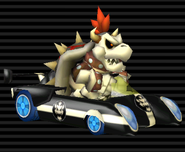 Wario's Jetsetter in action on Wario's Gold Mine.
Add a photo to this gallery

Retrieved from "https://mario.fandom.com/wiki/Jetsetter?oldid=292398"
Community content is available under CC-BY-SA unless otherwise noted.