Jumping on them
Ice Bros. are a sub-species of Koopa Troopa that debuted in New Super Mario Bros. Wii. They are very similar to Hammer Bros., except that they are cyan colored and that they throw ice balls instead of the usual hammers. Ice Bros. are the exact opposite of the Fire Bros., when the player touches one of their icy projectiles, he is injured and frozen in an ice block. In New Super Mario Bros. Wii, the player has to shake the Wii remote to break free.

Ice Bros. appeared in New Super Mario Bros. Wii. If hit by an ice ball, the player will have to shake the Wii Remote in order to get free. They are found in underground caves or snow/ice-themed areas.

Ice Bros. appear in Paper Mario: Sticker Star appearing in Snow Rise, Ice Flow, Whiteout Valley, Rugged Road (at the beginning after you freeze the area), Bowser Jr.'s Flotilla, and Bowser's Sky Castle. They attack by throwing their Ice Balls at you. They can also damage you in the overworld and in the opposite manner to Fire Bros, they take double damage from fire and are immune to ice and take 2 less damage from regular attacks (apart from Things due to their piercing effect) due to their Defense.

Ice Bros. reappear in Paper Mario: Color Splash behaving in the exact same way as they did in Sticker Star. They are mainly found in the Parallel versions of Fortune Island and the surrounding Islands. 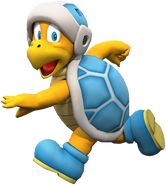