Jumping
Fireballs
Starman
Hammer Bros. (or Hammer Brothers) are recurring enemies in the Mario series. They are specialized Koopa Troopas commonly found in pairs (though not exclusively so) who wear light armor and utilize hammers as their main weapons. Hammer Bros. first appear in the later levels of Super Mario Bros.. They look similar to a Boomerang Bro. or a Fire Bro. except they have different weapons and colors of their armor, Fire Bros and Boomerang Bros being red and blue respectively.

Hammer Bros are described in various games as being the elite of Bowser's army and often appear in games either as powerful generic enemies or as boss characters. A Hammer Bros.' attack pattern consists of guarding a small area and tossing hammers at the player, occasionally moving around or jumping. The Mario RPG games introduced a more varied attack pattern for Hammer Bros., such as the ability to throw a rapid volley of hammers or throw a single hammer with enough force to shrink the player. Beginning with Mario Superstar Baseball, Hammer Bros. infrequently appear as playable characters in spin-off Mario games. They appear in Super Smash Bros. Brawl as Assist Trophies. In Mario Superstar Baseball, They use a Hammer as a bat. They also appear as a boss in Mario Party DS and as an unlocked playable character in Mario Party 8.

Hammer Bros. first appeared in Super Mario Bros. where they were semi-common enemies found in several levels. They usually appear in pairs (hence the name) and they will lob hammers in arcs. touching one of these hammers will result in Mario taking damage. Like any other enemy, Hammer Bros. can be easily defeated with a stomp or a fireball. If Mario is in front of a pair Hammer Bros. and waits long enough, the Hammer Bros. will begin to chase him.

Hammer Bros. reappear in the Japanese sequel to the previous game, playing the same role as they did in the past. Hammer Bros. can also be found underwater and in castles.

Hammer Bros. make another appearance in Super Mario Bros. 3 where they are fought the same way as in the past. They can also be found on the world map, where of Mario runs into one, he will be transported to a level where Mario must defeat the Hammer Bros. in order to clear through. Three new variety of Hammer Bros. also appear in the game: The Boomerang Bros, the Fire Bros, and the Sledge Bros.

After a long absence from the Super Mario games, Hammer Bros. reappear in New Super Mario Bros. where they attack in the same manner as they did in previous entries. They can also be found on the world map, but if Mario encounters one, he will enter the level like normal but have a Hammer Bro near the beginning of the level standing in his way.

Hammer Bros. appear again, playing the same role as they did in New Super Mario Bros. They can only be found in 1-3. Yoshi can swallow the hammer that they throw and spit it back at them, defeating them. A new variety of Hammer Bro. was introduced called the Ice Bro.

Hammer Bros. appear in Super Mario 3D Land, acting just the same as they did in Super Mario Galaxy 2, with the exception being that they only take one stomp to defeat.

Hammer Bros. behave the same as they did in New Super Mario Bros. Wii. If Mario were to go through a Gold Ring, Hammer Bros. would toss coins at Mario instead of hammers.

Hammer Bros. reappear in this entry, acting just the way they have in past New Super Mario Bros. games.

Hammer Bros. appear as placable enemies for players to spread around their levels. Hammer Bros. can be given wings to fly in the air for a bit. Giving them a Super Mushroom turns them into Sledge Bros.

Hammer Bros. appear once more in Super Mario Odyssey, being first found in the Luncheon Kingdom where they throw frying pans instead of hammers and where chef hats. Mario can throw Cappy at a Hammer Bro to knock it's hat off, revealing short, multicolored hair on their heads. Mario can also capture a Hammer Bro. As a Hammer Bro, the player can jump higher than normal and can throw and unlimited supply of Hammers/Pans, and can throw even faster and farther by shaking the controller. Hammer Bros. can also be found in the Moon Kingdom and the Dark Side.

Hammer Bros. reappear in the sequel to Super Mario Maker, behaving the same as they did in the past games. In the Super Mario 3D World graphic style, the player can add Fire Bros.

Two Hammer Bros are fought on Mushroom Way as bosses in Super Mario RPG: Legend of the Seven Stars. Mario must fight them alone. Fortunately, they are weak to his Jump move. After he defeats the Hammer Bros, Mario gets a Hammer as his first weapon.

Hammer Bros. appear in Paper Mario, where they are fough in Bowser's Castle. Hammer Bros also have the unique power to shrink Mario by throwing a flurry of hammer at him.

Hammer Bros. reappear in the sequel to Paper Mario, where they're fought in the Sewers of Rogueport, as well as in the Glitz Pit. They're appearance has been tweaked slightly to where they now wear red shoes and have spiked wrist bands. They no longer hold the power to shrink Mario.

Hammer Bros only appear in The BitLands and Castle Bleck, where they were mind controlled to obey Count Bleck by Nastasia. They behave just the same as they did in other 2D platformers.

Hammer Bros. reappear in Paper Mario: Sticker Star, where their designs is heavily based on their New Super Mario Bros. look. They're mostly found on Bowser Jr.'s Airship

Origami Hammer Bros. are set to appear in the upcoming entry of the series.

Hammer Bro's second appearance was in Mario Party 2 in a mini-game called Deep Sea Salvage, the object of this game is almost identical to the mini-game Hammer Drop from Mario Party. The player had to collect coins and money bags thrown by Hammer Bro while avoiding the hammers. This game was played in the water instead of on a tower.

In Mario Party 3 Hammer Bro once again made various appearances throughout the mini-games.

Mario Party 5 was the first game on the Nintendo GameCube that Hammer Bro made an appearance in. In the game, it appeared as a capsule. The capsules effect caused whoever stepped on it to get hit by Hammer Bro's hammers and lose 10 coins. Hammer Bro also appeared in the mini-game Fight Cards as a referee, where his role was to decide the winner of a round and who would be eliminated.

In Mario Party 7 Hammer Bro appeared as an Orb having the same effect as the capsule in Mario Party 5 except that the owner of the orb would receive the ten coins given instead of taken. Hammer Bro also appeared in the eight-player mini-game Hammer Spammer, where the eight players would have to dodge the multiple hammers thrown by the four Hammer Bros and the two giant hammers that would occasionally drop.

Mario Party 8 is the first game in the Mario Party series that Hammer Bro was made a playable character. He was unlocked by beating the Star battle area on all boards. If you VS Blooper on Bowser's Warped Orbit you will unlock him instead of Hammer Bro.

In Mario Party 9, When landing on the Battle mini-game space, Hammer Bro on a floating pad appears and takes all your stars from you by throwing hammers. His rules are the person in 1st place receives 6 Mini Stars and the person in last place gets no stars. He allows a captain to choose a Free-For-All mini-game. When nearly finished, he allows the one last place to choose a Free-For-All mini-game.

Hammer Bro was not playable in Mario Party DS, although he did appear as a boss of Toadette's Music Room. He had two spaces on the board that would send anyone who landed on them flying to another part of the board. To clear the board, Hammer Bro had to be defeated in a mini-game called Hammer Chime. In the mini-game, Hammer Bro would play on the five different colored drums and then the player had to copy. There were a total of three rounds. Hammer Bro spoke for the first time in Mario Party DS saying "Yo, yo!". 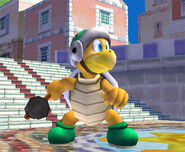 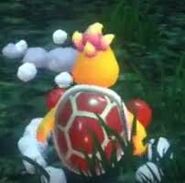 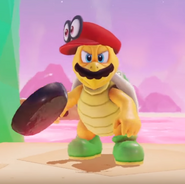 The Hammer Bros. in the first series.