Hammers are red ghosts with square bodies, they have white eyes and mouth. Unlike most other ghosts, Hammers have two tails and eyebrows.

Like Goobs, Hammers work for Hellen Gravely in the game. They attack by slamming their face on the ground and using shoulder bash. Hammers will charge before using shoulder bash, while charging they can't be flashed. The way to defeat Hammers is different to the way to defeat Goobs, Luigi can't suck Hammers from the from the front, he can only flash them and suck them from behind.

Artwork of a Hammer. 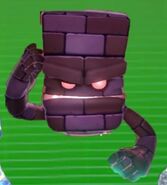 Lethal Hammer.
Add a photo to this gallery
Retrieved from "https://mario.fandom.com/wiki/Hammer_(enemy)?oldid=282997"
Community content is available under CC-BY-SA unless otherwise noted.